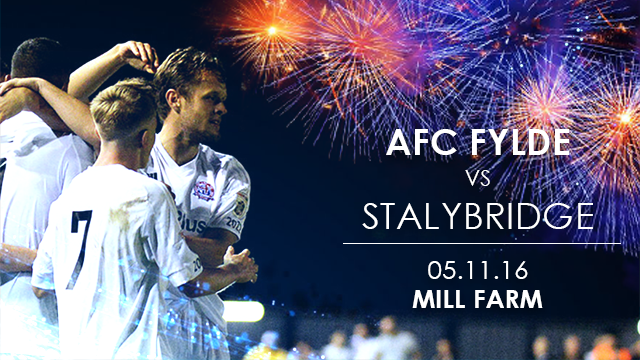 AFC Fylde will be looking to get back to winning ways when they welcome struggling Stalybridge Celtic to Mill Farm on Saturday.

The Coasters suffered their first league defeat of the season last time out at Tamworth, halting a sensational 15-match unbeaten run.

A solitary goal from Tamworth striker Daniel Newton was the difference in a tightly-contested encounter and now Dave Challinor’s troops will be desperate to head into next Saturday’s mammoth clash against second-placed Darlington with a win under their belts.

Fylde remain top of the National League North table despite the defeat, although their four-point lead has been cut to one following Darlington’s 4-1 victory at Harrogate Town.

Stalybridge have endured a difficult start to the season and currently sit 20th in the table. The campaign started well with a 1-0 victory over Boston United however that was followed by seven defeats on the spin. The winless run was halted by a 3-2 victory over Gainsborough Trinity but six consecutive defeats left Celtic in a dangerous position.

Fylde enjoyed a resounding victory over Stalybridge in the reverse fixture last season, running out 5-0 winners at Kellamergh Park almost exactly a year ago, however they were held to a 1-1 draw at Bower Fold in April.

Defender Steve Williams is in line for a return to the squad after recovering from a foot injury. Williams was one of several first team stars that featured in a friendly match on Wednesday night. Fellow defender Dom Collins is still missing through injury.

Make sure you pick up your Matchday Programme, priced at just £2. With 52 pages jam-packed with all the latest information, player interviews and photos – the programme is not to be missed!

The game will also be live on MatchdayFM and Fylde Coast Radio. Follow @MatchdayFM and @FyldeCoastRadio on Twitter for more details. Regular updates also on Radio Wave (@965RadioWave)