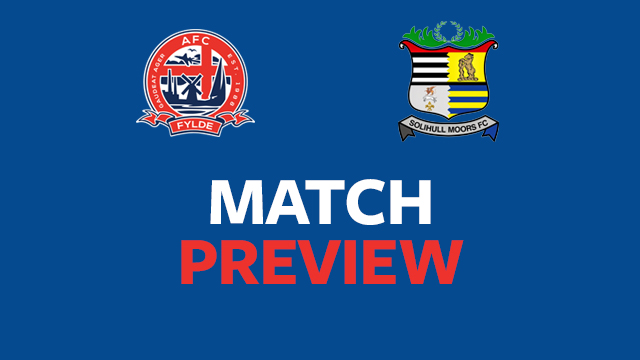 AFC Fylde return to league action at the weekend for what is sure to be one of the clashes of the season against fellow high-flyers Solihull Moors.

The Coasters are just one point off the top of the table behind leaders Nuneaton Town, but have two games in hand.

Last time out in the league, Dave Challinor’s side came out top in a thrilling match against Alfreton Town – goals from James Hardy and Matty Hughes completing a fine comeback.

Solihull slipped up in their last league outing, suffering a 1-0 home reverse against Boston United.

Challinor is waiting on the fitness of Matty Hughes and Sam Finley, who both came off injured in the last match against Skelmersdale United.

>Pick up a match programme on sale inside the ground. This week’s edition is just £2 and includes an exclusive player interviews, plus many other exciting features on both AFC Fylde and our visitors. Also available is the match day 50/50 which is growing in value by the week and gives you the chance to win a big cash prize!