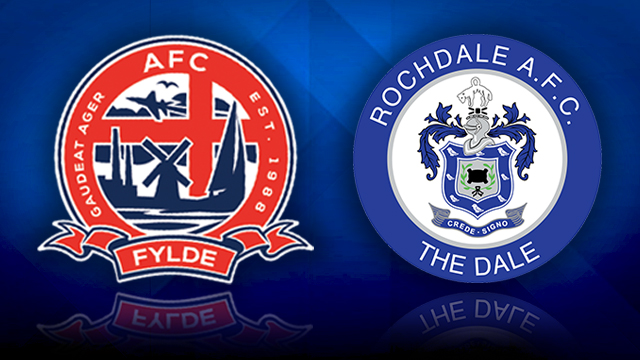 League One side Rochdale kick off their pre-season friendly campaign tonight at Kellamergh Park against the Coasters.

Fylde already have one warm up match under their belts following Friday’s 2-0 defeat to Stranraer. Dave Challinor used a total of 23 players during the match as he cast his eye over several potential signings for the new season.

The visitors enjoyed a solid season last time out finishing a respectable 10th place in the League One table, just five points outside of the play-off positions.

Keith Hill’s side have brought in several new faces so far this summer including Harrison McGahey from Sheffield United, Scunthorpe United’s Niall Canavan and Oliver Rathbone from Manchester United.

Striker Ian Henderson proved reliable in front of goal netting 13 league strikes and will again be leaned on as Rochdale look to make a play-off push.

Young frontman Joe Bunney chipped in with his share of goals too, finding the net on nine occasions, whilst former Peterborough winger Nathaniel Mendez-Laing was a threat and weighed in with 10 goals in all competitions, including an FA Cup hat-trick against Swindon Town.

The visitors, who have recently enjoyed a week of warm weather training in Tenerife, have been handed a difficult start to the new League One season with an opening fixture against Peterborough United followed up by a trip to promotion-hopefuls Sheffield United.

Our match against Dale is their first of four friendlies against National League North sides. After Tuesday’s game Rochdale take on Curzon Ashton, Stockport County and FC United of Manchester with matches against Blackburn Rovers, Wigan Athletic and Macclesfield sandwiched between.

The two clubs have faced each other on the same date for three years running now, sharing the spoils with one win each.

Prior to the 2014-15 season, Dale nicked a 2-1 victory whilst last summer Fylde ran out winners courtesy of a Richie Allen penalty.

Midfielders Andy Bond and Richie Baker missed Friday’s game through injury and are both a doubt for tonight’s match.