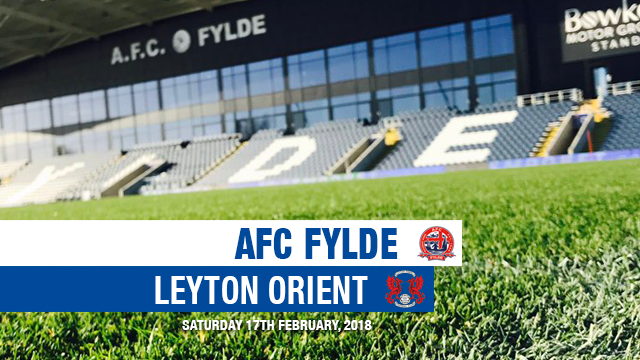 This weekend’s fixture schedule could prove to be pivotal as the race for promotion hots up!

The Coasters welcome Leyton Orient to Mill Farm on Saturday as they look to complete their first league double of the season.

Dave Challinor’s troops stormed the play-offs once again with victory at Gateshead last weekend and will be keen to keep pace with those above, many of whom face each other!

Fylde have picked up 23 points from a possible 30 and sit pretty at the top of the form table over the last 10 games in the National League.

The fine form has been in large part down to star striker Danny Rowe, who helped himself to another two goals last time out as the Coasters left the North East with maximum points. Rowe now has 18 league goals to name – the highest in the division – and 24 in all competitions.

This weekend will see the Fylde hitman go up against his main competitor for the Golden Boot award. Orient frontman Macauley Bonne has hit an impressive 15 goals so far this term so prepare for a ‘shoot on sight’ philosophy from the goal-hungry marksmen!

The O’s made an surprisingly slow start to life in non-league football following their drop from League Two in the summer, however their form has improved recently and they currently sit 17th in the table with 15 points from the last ten games.

Last time out they held promotion hopefuls Tranmere Rovers to a frustrating 1-1 draw.

The previous meeting between Fylde and Orient back on September saw Challinor’s side grind out a resolute victory.

Two stunning goals from that man Rowe put the Coasters in control and although former Premier League star Jobi McAnuff pulled one back for hosts in the second half, Fylde held on to win 2-1.

Steve Davis was the manager at Brisbane Road at the time, however he has since been replaced by Justin Edinburgh, who has tightened the O’s rearguard.

Edinburgh took over with the east Londoners dangerously close to the bottom four, but they now have a six-point cushion.

Team news:
Dave Challinor has no fresh injury concerns ahead of the match. James Hardy will be pushing for a start after lively substitute appearances in the last two games since returning from injury.