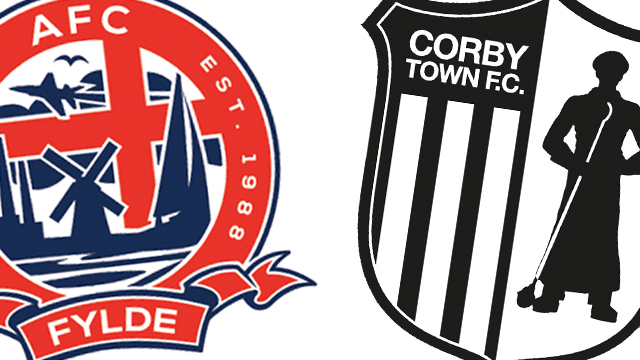 Dave Challinor’s side will be hoping to build on the fantastic 5-2 victory over Boston United on Saturday that saw Fylde climb up to fourth in the league standings.

The Coasters had suffered a disappointing run, picking up just one point from the previous three matches but were back on track in style in the seven-goal thriller.

Matty Hughes, James Hardy, Josh Langley, Richie Baker and Dion Charles all got in on the act against the high-flying Pilgrims as Fylde leap-frogged both their opponents and Nuneaton Town in the table.

Corby have been enduring a battle of their own at the wrong end of the table this season following their promotion in the summer.

The Steelmen currently occupy bottom spot in the NLN following a 4-1 home defeat  against North Ferriby United last time out and they have won just three times in the last 14 matches.

Despite their defensive frailties, Corby boast one of the league’s top scorers in their ranks in Greg Mills who has 15 goals to his name so far.

Fylde emerged victorious in the last meeting between the sides back in October as two goals from Baker secured a 2-1 win at Steel Park.

Challinor hopes his side can build on the weekend’s success: “We have to back up the result on Saturday with a performance against Corby.

“Hopefully then we can look back at the frustrating draw at Nuneaton a week ago as a good point rather than a disappointment.

“We know where we are at and where we need to be. We have 11 games left and it isn’t over from our point of view until it’s over. We keep going until it’s mathematically impossible.

“If we can keep producing performances like we did at the weekend then we are going to be difficult to beat and we will win more games than we lose.

“Equally importantly we were very entertaining to watch. I want to see us play with that tempo and freedom every week and show people that we are a very good side.”

The manager should have a full squad to select from tomorrow evening, bar midfielder Sam Finley who is serving the final game of his three match suspension.