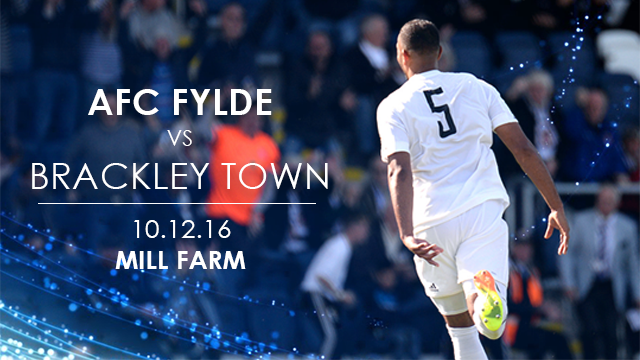 The Buildbase FA Trophy first round

AFC Fylde switch their attention back to the FA Trophy this weekend for the visit of Brackley Town to Mill Farm.

The Coasters secured their place in the first round of the competition with a last-gasp winner against Gloucester City in the final qualifying round a fortnight ago.

Fylde trailed the match with less than five minutes to play, however top scorer Danny Rowe had other ideas and netted twice to seal his hat-trick, including a 94th minute winner, and complete the turnaround.

Brackley booked their own place in the first round more recently following a replay victory over Mickleover Sports. Brackley were held to a 1-1 draw away from home in the original tie, but triumphed 3-1 in the replay three days later.

Dave Challinor’s have embarked on another unbeaten run since their solitary defeat of the season at Tamworth and are now six games without defeat.

Last time out, the Coasters eased to a narrow 2-1 victory over Worcester City, with Rowe bagging his 100th goal for the club in under two-and-a-half years.

Fylde moved a huge seven points clear at the top of the National League North table following victory at Worcester and the festive double-header against Chorley over the festive period could prove pivotal in the title race.

Brackley sit in a respectable eighth position in the league standings, five points outside the play-off places.

The two sides played out a 1-1 draw earlier in the season in the first ever game at Mill Farm.