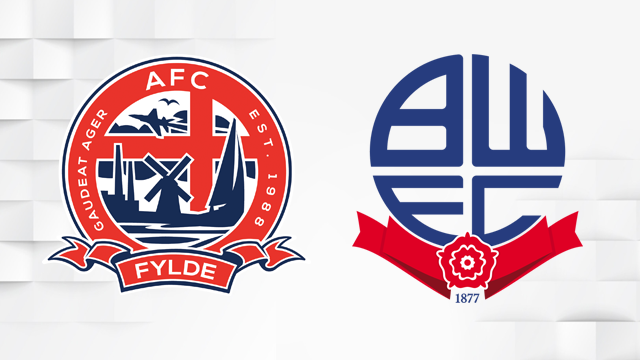 Bolton Wanderers will become the first Championship side to visit Mill Farm when they arrive for tonight’s pre-season friendly.

This evening’s match will be the Coasters’ third pre-season outing of the summer, following a 5-0 victory over Marine and the narrow 1-0 defeat against Rochdale at the weekend.

Fylde dominated the first half against their League One opposition but fell behind to Steve Davies’ unstoppable free-kick shortly after the break.

Goalkeeper Jay Lynch made his first appearance for the club on Saturday and will be hoping to face a former employer this evening.

Lynch joined Bolton in 2010 from Manchester United and after progressing through their Under-18, Under-21 and Reserve sides, the 24-year-old was named on the bench for three of their Premier League games during the 2011–12 season.

Midfielder James Hardy also made his first appearance of the season as Dave Challinor stepped up preparations for the new National League campaign.

Newly-promoted Bolton have made an impressive start to their pre-season campaign. They kicked off with a 3-2 victory over Chorley before seeing off Scottish sides Arbroath and Dundee, both 2-1.

Wanderers have strengthened their ranks over the summer as they prepare for life back in the second tier of English football, most recently with the loan signing of young Newcastle striker Adam Armstrong. The 20-year-old scored six Championship goals on loan at Barnsley last season.

Coasters boss Challinor is expected to shuffle his pack once again this evening, with a potential reverse of the two sides that he put out against Rochdale three days ago.

Fylde face a two more friendlies before the 2017-18 season kicks off with a final home game against Morecambe on Tuesday 25th July before wrapping up pre-season with an away trip to Curzon Ashton on Saturday 29th July.

Challinor’s side start the new season on Saturday 5th August against Boreham Wood at Mill Farm, before travelling to Chester three days later for the first away game.

Get tickets with the click of a button right here