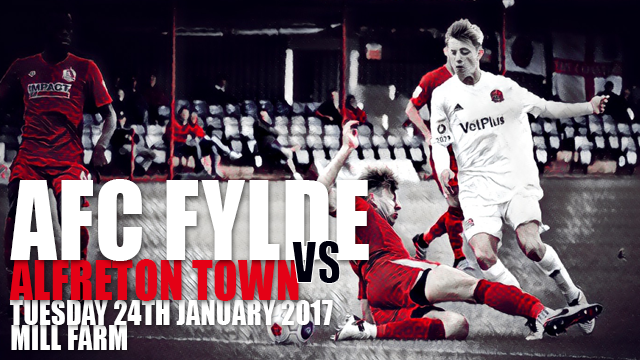 AFC Fylde will be aiming to bounce straight back from Saturday’s defeat at Curzon Ashton.

The Coasters opened the scoring through a superb Brendon Daniels goal and despite falling behind to two Curzon goals late in the first half, equalised later in the match with a screamer from Danny Rowe.

However, a late mistake saw Ryan Hall nick the winner for the hosts, condemning Dave Challinor’s side to just their third defeat of the season.

The Coasters still lead the pack in the National League North by six points with 16 games left to play. Kidderminster Harrier and Chorley both cut the gap at the top by three points after beating AFC Telford United and Altrincham respectively.

Today’s match is the first of a double header at home for the Coasters against teams in the lower reaches of the table, with basement club Altrincham the visitors on Saturday.

This evening’s visitors Alfreton have been one of the league’s entertainers this season with their 24 games boasting 111 goals, the highest average goal to game ratio in the division. And with Fylde second placed on that list we could be in for thrilling encounter!

Alfreton have suffered just one defeat in their last five league outings, but at the same time have won just once – a 3-2 victory over Telford.

Reds striker Craig Westcarr, who netted a fine free-kick in the reverse fixture against Fylde earlier in the season, has 10 goals this term, however Danny Rowe, who bagged four times in that previous visit to the Impact Arena, chalked up his 33rd league goal of the season last time out at The Tameside Stadium.

Team news:
Defenders Josh Langley and Macauley Wilson both face late fitness tests after picking up knocks at the weekend.