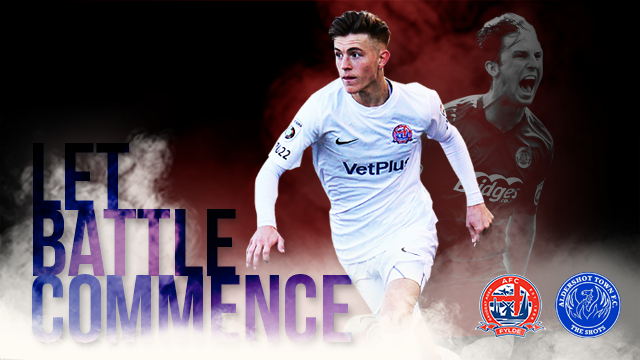 AFC Fylde are back in action tomorrow afternoon against high-flying Aldershot Town after an extended break due to the weather.

The Coasters’ scheduled National League fixture at Torquay United last weekend was called off due to a frozen pitch and safety concerns amid treacherous weather conditions.

Fylde headed into last weekend’s round of fixtures in the top seven, however the postponement saw Dover Athletic take the initiative and they have since replaced the Coasters in the play-offs with back-to-back victories.

Dave Challinor’s side now trail Dover, who they beat 3-1 last time out at Mill Farm, by five points with a game in hand.

The race for play-offs is in full swing with ten games to go, with just six points separating ninth-placed Ebbsfleet Town and Tranmere Rovers in fourth.

Goals from Danny Rowe, Serhat Tasdemir and James Hardy secured a fine comeback victory against Dover to end a run of two consecutive defeats – the first time Fylde have lost two games on the bounce in two years.

Rowe now has 19 in the league for the season, three ahead of Boreham Wood’s Bruno Andrade, and goes in search of 20 league goals tomorrow for the fourth consecutive season.

Irish forward Shamir Fenelon is the Shots top scorer so far this term with 10 strikes to his name.

Aldershot have enjoyed a fine season as they look to replicate their 2007/08 season where they won the then Blue Square Premier.

After a run of eight without defeat, Gary Waddock’s side have endured a slight stutter and are currently without a win in three. A home defeat against league leaders Macclesfield Town has been followed by draws against fellow promotion hopefuls Bromley and Wrexham.

The Shots now trail top spot by five points, but look secure in the play-offs, sitting eight points ahead of ourselves in eighth place.

The reverse fixture at the EBB Stadium earlier in the season was the first ever meeting between the two clubs.

Fylde suffered their first defeat in five in a bad-tempered November clash down in the capital. Rowe cancelled out Shamir Fenelon’s first-half opener shortly after the break, before both sides saw red as tempers flared. Shots defender Will Evans had the final say, heading home in the last five minutes to seal all three points for the hosts.

Team news:
AFC Fylde: Dave Challinor has no fresh injury concerns ahead of the match. Defender Josh Langley is the only certain absentee from the squad as he recovers from long term injury. Look out for an interview with Josh on his progress coming soon.

Aldershot Town: Gary Waddock will once again be without goalkeeper Lewis Ward, who is likely to remained side-lined for a couple more weeks. Jim Kellerman and Forest Green Rovers loanee Fabien Robert are also doubtful. Nick Arnold completes the quartet of players likely to be unavailable, but Cheye Alexander has now fully recovered from his eye infection.