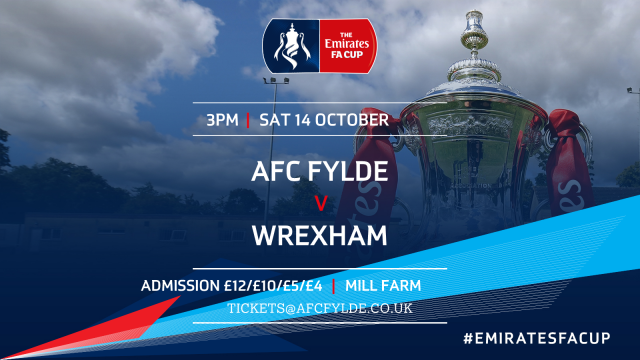 The Coasters enter this season’s FA Cup at the final qualifying stage and go head to head with fellow National League side Wrexham for a place in the first round proper.

Fylde have reached the first round in three of the last five years, facing League sides Accrington Stanley, Plymouth Argyle and Millwall.

Today’s match will be the first ever meeting between AFC Fylde and Wrexham and falls just ten days before we welcome the Dragons back to Mill Farm in the National League.

Fylde have made a mixed start to the season and currently sit in 19th place in the table with 16 points. Last time out Dave Challinor’s men were undone by a quick-fire double in the space of a minute down at promotion-hopefuls Sutton United.

Defender Simon Grand pulled a late goal back for the Coasters, who had earlier seen midfielder Lewis Montrose dismissed for a second bookable offence, however they were to leave the capital empty handed. The previous week, Fylde enjoyed far greater success down in London with a famous 2-1 victory over Leyton Orient.

The Coasters still remain one of the top scoring clubs in the division, despite their league position, having netted 22 goals in their opening 15 fixtures.

Wrexham arrive at Mill Farm on the back of some fantastic form that sees them unbeaten in their last ten matches.

Last time out Dean Keates’ side came from behind to seal three points in a 2-1 win over Eastleigh. Second half goals from skipper Shaun Pearson and Chris Holroyd extended their incredible unbeaten streak into double figures.

Wrexham suffered a disappointing defeat at this stage of the FA Cup last season – Northern Premier League Division One South side Stamford dumping the Dragons out in extra-time during a replay at the Racecourse.

Fylde themselves fell at the first hurdle last season, slipping to a 1-0 defeat at Alfreton, despite having seen off the Reds with a thrilling 5-3 victory just a month previously.

If this afternoon’s tie ends as a draw, the replay will be held at The Racecourse Stadium, Wrexham, on Tuesday 17th October.

The draw for the first round proper takes place at 7pm on Monday.

Team news:
Coasters: Defender Jordan Tunnicliffe will face a late fitness test after coming off against Sutton United last weekend, whilst Lewis Montrose serves the first game of a two-match suspension following his second red card of the season.

Wrexham: The Dragons are without goalkeeper Luke Coddington, who has returned to Northampton after his loan spell expired, whilst fellow keeper Christian Dibble remains sidelined with a back injury.