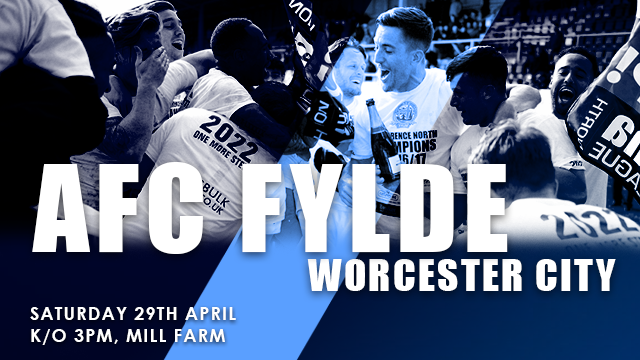 Another hard-fought season draws to a close this weekend and what a season it has been!

Last Saturday saw the Coasters crowned league champions following a 3-0 victory at Boston United and now we can finally get our hands on that trophy!

Fylde have lead the pack for the majority of the season and the title triumph was more than deserved after a phenomenal campaign for Dave Challinor’s side.

Leading marksman Danny Rowe’s brace at York Street put him up to an incredible 49 goals for the season and also broke the record for goals scored by a club during a National League North season, previously held by Chester (103).

Matty Hughes’ late goal in Boston put the icing on the cake and sealed promotion to the National League.

We have some pre-match awards to dish out before the big prize is presented at the end of the game so get ready for a day of celebration at Mill Farm.

We welcome Worcester City to Lancashire on Saturday and must be mindful that our visitors have a very different task ahead.

City must pick up a positive result at Mill Farm to stand any chance of survival so will pose a real threat, however Challinor is keen to end the season on a high so expect another high intensity encounter.

Worcester currently sit in the relegation zone, one point behind Gainsborough Trinity, who travel to FC United Of Manchester on the final day. City must better Gainsborough’s result to stay up.

Team news:
Coasters midfielder Sam Finley serves the second game of his two-match suspension, whilst Dom Collins and Dan Bradley face late fitness checks after picking up knocks against Boston. James Hardy remains an injury doubt with a back problem.

Worcester are likely to be without experienced right-back James Chambers, who hobbled off against Salford City on Saturday, whilst there are also question marks over the fitness of Ebby Nelson-Addy and Junior English.

Other information:
> We have Champions t-shirts on sale from the club shop, Bradleys Sports Bar and the Kiosks on the day and they are priced at £8 for adults and £6 for kids.

> Do not miss out on your limited edition matchday programme (priced at £3), jam-packed with news, views and all of last week’s celebrations!

> The club would like to remind all our fans that any incursion onto the pitch by supporters poses a threat to the safety of players, officials and fellow spectators. We would therefore ask fans to refrain from going on to the pitch at any time. The Championship Trophy will be presented after game. The players and coaching staff will leave the field of play at the final whistle and will only be asked to return to be presented with the Trophy and their medals if the pitch is clear of supporters.