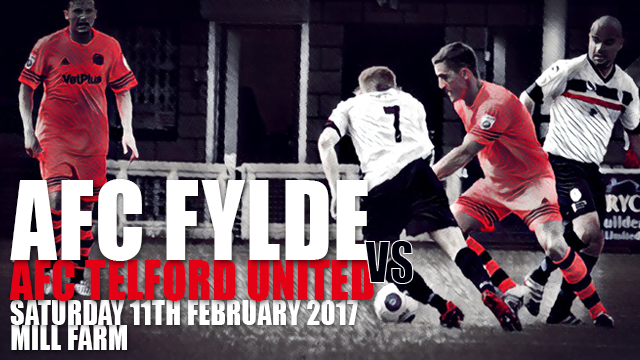 The Coasters are back at Mill Farm this weekend as they entertain struggling AFC Telford United on Saturday.

The hosts will be looking to bounce back from their surprise 5-0 defeat at Salford City last weekend – their heaviest defeat at this level.

Fylde have lost just four league games this season, however three of those have come in the last seven games. On a positive note, Dave Challinor’s side have followed up all three previous defeats with victory in the next game and will be keen to continue that sequence on Saturday.

Despite defeat, the Coasters remain nine points clear at the top of the National League North table ahead of Salford in second place. However, third-placed Kidderminster Harriers could close the gap if they pick up positive results from their two games in hand. Fylde have now led the pack for 20 consecutive games, since September 6th.

Telford have picked up just one victory in their last seven league outings and find themselves just two points and one place outside the drop zone.

Their solitary victory since mid-November came against Curzon Ashton almost a month ago.

Scoring goals has proved a real problem for the Bucks who have averaged less than a goal a game so far this term. Former Fylde man Josh Wilson is their top goalscorer with seven strikes to his name.

Goalkeeper Matt Urwin is another familiar face returning to his old club this weekend after completing his loan move to Telford from Fleetwood Town.

A Danny Rowe goal decided the reverse fixture on the opening day of the season. The frontman now has 35 goals in the league – 20 more than his nearest challenger, Tamworth’s Danny Newton.

Team news:
Dave Challinor is hoping for the return of at least three of his injured stars this weekend. Captain Josh Langley and midfield quartet Andy Bond, James Hardy, Sam Finley and Matty Hughes all missed the trip to Salford last weekend.