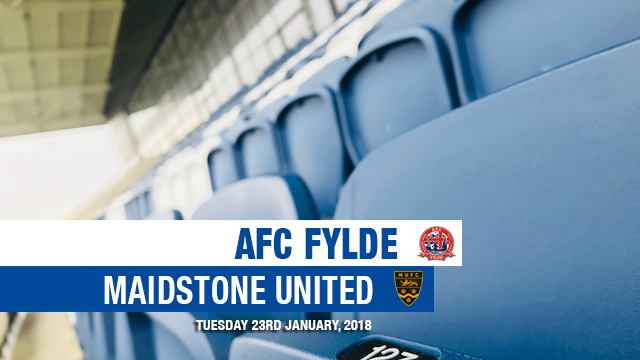 AFC Fylde could break into the National League play-off places tonight with victory over Maidstone United.

An incredible run of five wins from six games and a total of 16 points from a possible 18 has seen the Coasters hit the dizzy heights of ninth in the table, just two points behind Bromley in seventh.

Tonight’s match completes a run of four consecutive home games – the last of which brought about one of the most memorable results in recent history.

Macclesfield Town arrived at Mill Farm top of the league, unbeaten in 11 having conceded just 6 goals in their previous eight outings, however they were subjected to a six-goal mauling by a sensational Fylde side.

Goals from Sam Finley (2), Lewis Montrose, Jack Muldoon, Jonny Smith and Andy Bond sent shockwaves through the National League, romping to a landslide win. Despite not scoring himself, club and league top scorer Danny Rowe remains two clear at the summit of the goal charts with 15 strikes to his name.

Victory this evening would not only move Fylde into the play-off places, it would see the league debutants just seven points off top spot … watch this space!

Maidstone make their second trip up to Mill Farm this season after the original fixture back in October was abandoned shortly after half-time due to torrential rain with the Coasters leading 2-1.

The Stones, managed by Jay Saunders, find themselves in 14th place with 38 points after 29 games. They are without a win in eleven and were beaten 3-2 at home against Eastleigh at the weekend.

Team news:
Dave Challinor has a virtually fully-fit squad to pick from tonight. Midfielders James Hardy and Henry Jones are available for selection after resuming full training whilst Mason Fawns is hoping to make his Coasters debut following his loan switch from Oldham Athletic. Defender Josh Langley remains the only long-term absentee.