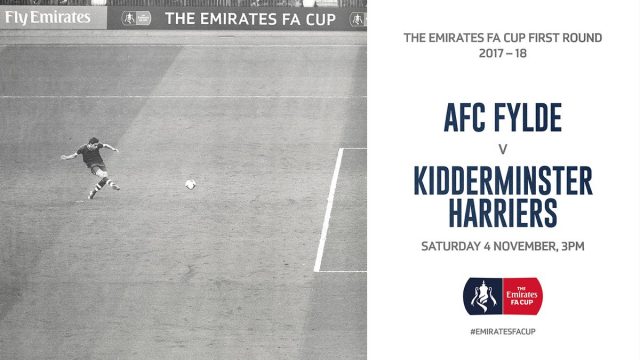 The magic of the FA Cup returns!

AFC Fylde will be hoping to secure a place in the Second Round of the competition tomorrow afternoon when Kidderminster Harriers roll into town.

The Coasters have an impressive record in the FA Cup having reached the first round in four of the last six years, but are now looking to reach the next stage for the first time.

The three previous attempts have seen Fylde come up against Football League sides – Accrington Stanley, Plymouth Argyle and Millwall – and manager Dave Challinor believes this is the best opportunity yet to progress: “Although we are expecting a tough test, this draw presents us with our best chance of reaching the next round.

“If we can get through to the second round then it represents a huge milestone for the club. We headed into the competition, as we do with any other, looking to better what we done previously.”

Challinor’s side head into the tie in red-hot form having won the last three games without conceding a goal.

Wrexham suffered the same fate twice in the space of ten days at Mill Farm, as a solitary goal from Danny Rowe earned the Coasters an FA Cup fourth qualifying round victory, before strikes from Jonny Smith and Jack Muldoon sent them home empty handed in ensuing National League encounter.

Last time out, Fylde romped to a comprehensive 4-0 victory away at Solihull Moors – a result which earned high praise from their now-departed boss Richard Money: “Fylde are the best team in the league in my opinion. I’ve seen 16-18 teams now and they are the best team by quite some stretch.

“Their third goal, magnificent. I’d be doing cartwheels if I was on their touchline. That’s a proper, proper team, who defended well.”

Tomorrow’s opposition Kidderminster made a surprisingly slow start to the season, however their form is improving and John Eustace’s side are now unbeaten in seven in all competitions.

The Harriers have already played three times in the competition this year, seeing off Deeping Rangers (W4-2), Newcastle Benfield (W1-0) and Chester (W2-1) to reach this stage.

The Coasters and Kidderminster enjoyed a thrilling rivalry last season as they went head to head for the National League North title – a battle in which Fylde ultimately came out on top.

Both games between the two sides ended level, with a 3-3 draw at Aggborough before a 97th minute equaliser from Matt Blinkhorn sealed a 2-2 draw at Mill Farm.