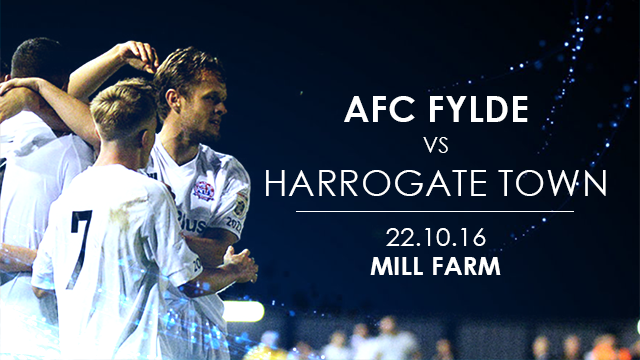 AFC Fylde welcome Harrogate Town to Mill Farm on Saturday as they look to extend their lead at the top of the Vanarama National League North.

Fylde are currently 14 games without defeat in the league so far this season and have a four point lead over second-placed Darlington at the start of play.

The Coasters overcame the challenge of Harrogate in last season’s play-off semi-finals and both sides are set to challenge for promotion once again.

Coasters’ striker Danny Rowe moved onto 20 goals for the season with the match-winning strike against Nuneaton, only four less goals than he managed in the entirety of last year’s campaign.

Rowe’s teammate James Hardy will be looking to celebrate his call-up to the England C squad in style. Hardy has five goals and five assists to his name already so far this season and scored the winner in the 2-1 victory against Harrogate back in April

Fylde are, however, still in search of their first ever clean sheet at Mill Farm and first clean sheet since the 6-0 victory over Altrincham in mid-August.

Harrogate make the trip to Mill Farm having only lost two games in the league so far this season.

Those two losses however, have come in Harrogate’s last four games against Alfreton and Chorley which has seen Simon Weaver’s men fall behind Fylde at the top.

Harrogate have also made several impressive signings over the summer.

Amongst those signings was Simon Ainge who is suspended for tomorrow’s encounter. Town also signed former Wycombe midfielder John-Paul Pitman from Grimsby Town who is Harrogate’s top scorer in the National League North so far this season with nine goals.

A win for Fylde will move Dave Challinor’s men ten points clear of the visitors although Harrogate have a game in hand due to being in FA Cup Qualifying action last weekend.

Make sure you pick up your new look Matchday Programme, priced at just £2. With 52 pages jam-packed with all the latest information, player interviews and photos – the new programme is not to be missed!

The game will also be live on MatchdayFM from 2:45pm. Follow @MatchdayFM on Twitter for more details.