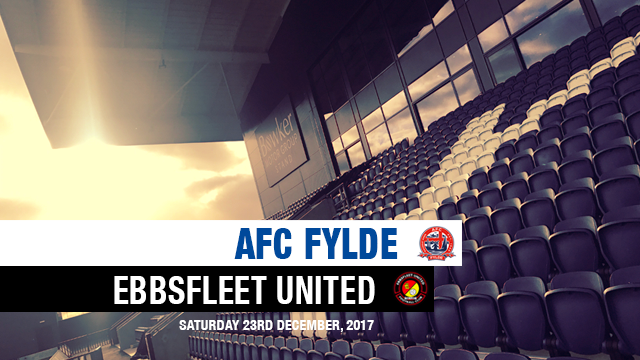 AFC Fylde are back in National League action in the final home game of the year.

The Coasters host Ebbsfleet United at Mill Farm as we approach the midway point in the season with Fylde looking to get back to winning ways after three defeats on the spin.

After the impressive 1-1 draw against Wigan Athletic in the FA Cup, Dave Challinor’s side were narrowly beaten 1-0 at Boreham Wood before cruelly losing to two late goals in the replay against the Latics. Another harsh cup exit followed as the Coasters crashed out of the FA Trophy on penalties against Chester last weekend.

On the league front, Fylde have enjoyed a solid first half to their debut National League campaign and currently sit in 17th place with three games in hand of the majority of other clubs.

January and February will be extremely busy for the Coasters with no less than 13 games over the two months, including three more before the end of 2017!

Ebbsfleet ran out resounding winners last time out with a 4-0 drubbing of lowly Guiseley. Prior to that they netted three goals without reply in a big win over Hartlepool.

Fleet, managed by Daryl McMahon, find themselves in the top ten in the league standings with 34 points from their 23 games.

The reverse fixture was a frustrating afternoon for Challinor and his troops who raced into a two-goal lead at Ebbsfleet back in August courtesy of Danny Rowe and Henry Jones.

They were pegged back to 2-2 before again going ahead through Sam Finley however a last gasp equaliser down on the south coast denied Fylde a first win of the season.

Team news:
Full-back Luke Burke will miss the game after picking up his fifth booking of the season. Midfielder Henry Jones is back in contention after recovering from injury whilst James Hardy is still a few weeks away from fitness.