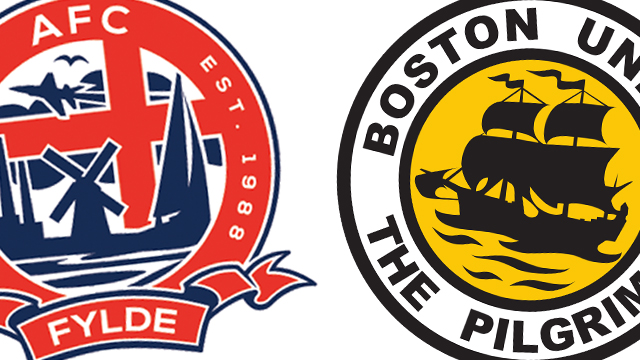 The Coasters face another promotion rival this weekend as Boston United arrive at Kellamergh Park.

Boston currently occupy fourth spot in the table, just two points and two places above ourselves.

Fylde missed an opportunity to go third during midweek as they were held to a frustrating 1-1 draw away at Nuneaton Town.

Nuneaton were reduced to ten men after just 25 minutes and the Coasters took immediate advantage, taking the lead through top scorer Danny Rowe with his 28th goal of the season.

However, Elliott Whitehouse levelled the scores soon after the break and a stubborn Boro side hung on for a point.

Boston themselves were held to a 1-1 draw last time out at home to Worcester City. The Pilgrims were more successful in the previous match, Dayle Southwell netting the decisive goal in a 2-1 victory over Bradford Park Avenue.

Southwell has enjoyed a tremendous season in front of goal and currently leads the NLN goalscoring charts with 16 strikes to his name. Defender Carl Piergianni is second in the club’s goal charts with seven goals from the back.

The Coasters came out top in the reverse fixture back in September with goals from Danny Lloyd, Richie Baker and Matty Hughes securing a comfortable 3-0 victory.

Midfielder Bohan Dixon will be hoping to make his home debut following an impressive performance against Nuneaton earlier in the week.

Caspar Hughes impressed on his return to the starting line-up in midweek after recovering from a groin injury. Sam Finley will serve the second of a three-match ban on Saturday following his red card against Lowestoft Town last month.