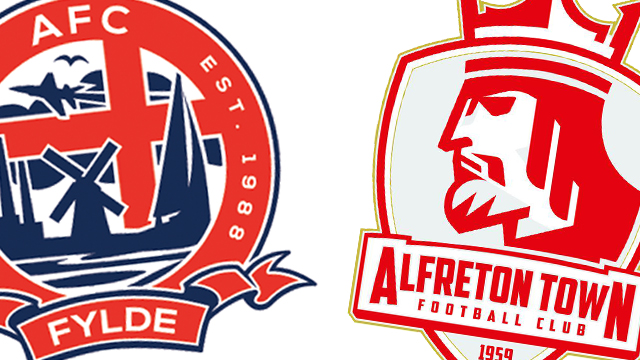 AFC Fylde are back in National League North action on Saturday against in-form Alfreton Town.

The Coasters’ last league outing at Stalybridge Celtic was abandoned just 12 minutes in due to poor pitch and weather conditions and Dave Challinor’s side will be hoping to end a difficult month on a high, following just one victory in February.

Defeats at Chorley and Gateshead were followed up with a hard-fought 1-0 victory over Gloucester City, before a 3-1 reverse at Lowestoft Town.

The Coasters currently sit in fifth place in the league, ten points adrift of table toppers Solihull Moors with a game in hand.

Alfreton Town are enjoying a fantastic run of form and are unbeaten in the last 12 attempts in all competitions. They have won six of their last nine league outings, drawing the other three and have climbed up into ninth position in the process.

The Reds were denied victory last weekend by an injury-time equaliser against Corby Town and find themselves 10 points outside the play-off places.

Young midfielder James Hardy (below) inspired the Coasters to victory over the Reds earlier in the season with a cameo appearance from the bench at the Impact Arena. Nicky Law’s side led 1-0 at the break, but Hardy came on to score the leveller before playing a pinpoint pass for Matty Hughes to steal in and nick the winner.

Alfreton have only lost once in the fourteen fixtures since that day and Coasters boss Challinor believes the visitors are starting to show their true colours.

“Alfreton struggled at the beginning of the season, but with the squad they have I expected them to be competing at the right end of the table and they are starting to do that now.

“They have players that are experienced at this level and the one above. They can mix it up in terms of playing football and being direct and we are expecting yet another tough game.

“We have a lot of games coming up next month and ideally we need to go into that spell on the back of a win.”

Full-back Caspar Hughes is Challinor’s only injury doubt for the weekend. The defender picked up a groin strain ahead of the match against Lowestoft Town and is 50-50 for the match.

Midfielder Sam Finley doesn’t start his three-match ban until next week and the rest of the squad is fighting fit.