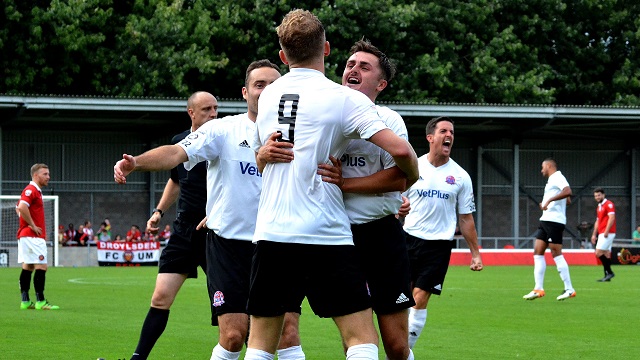 AFC Fylde manager Dave Challinor believes preparation has been key this week as the Coasters gear up for tonight’s trip to Stockport County.

Challinor’s side were forced to play with ten men for over half the match at the weekend following Sam Finley’s red card at FC United but despite the dismissal, the Coasters held on for a vital 3-2 victory courtesy of goals from Danny Rowe (2) and Bohan Dixon and currently sit three points clear at the top of the National League North table.

Fylde turned in a fantastic performance at Edgeley Park last season, seeing off Stockport 4-0, but Challinor insists his side must be ready for difficult test after an exhausting weekend.

Challinor said: “It’s yet another tough game and it is now a very important game for us. The FA Cup draw (away at Alfreton at the weekend) has thrown up three tough away games in a week now.

“We have one out of the way and ticked off with the right result and next up is a massive game against a side that are doing alright.

“The FA Cup game probably comes at a really good time for us because we can take stock and see where we are at after a hectic start to the season. We obviously want to do well in the cup but it is by no means the be all and end all.

“We have to make sure we look after ourselves and prepare properly after what was a huge effort on Saturday. It is more important than ever because that will have taken a lot out of the lads.

“We have been working on various things in training this season, including our pressing, but you cannot account for going down to ten men and how the team will react. The lads were disciplined and that is exactly what they needed to be. We had to show another side to our game and they were fantastic.

“We have to make sure that come 7:45pm tonight we are ready to go and ready to put in another shift. I want to see another big performance and hopefully that will produce another big result.

“It’s important that we keen backing up these good results, especially when you play so soon again afterwards. There is the opportunity to pick up six points in four days and that is huge.”