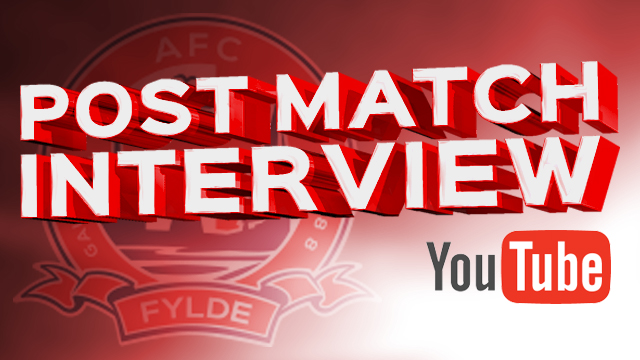 It may have been a disappointing result, but we’re not out of it, are we?

No. I think in the second half of the game we’ve shown we are capable of scoring and we did everything but score. The first half was just getting into it really, getting a feel for the game and there wasn’t much in it. We conceded a bit of a dodgy goal and their keeper made a few good saves but we should have taken at least one chance in that game. If we play the same on Saturday like we did in the second half tonight then we’ll beat them.

Do you think an early goal on Saturday would settle the nerves and really get us back in the tie?

It would be nice, yeah. If we score one early on then I can see us scoring one or two more.

In terms of the season, we finished second which was a great achievement but it was disappointing not to be able to win the title even though we came so close. Heck of a game, wasn’t it?

Yeah well to be honest it was the craziest game we’ve had all season. We don’t concede four goals in a game, I can’t remember the last time that happened but thankfully we scored six and we pushed Barrow all the way. Obviously we were thinking about whether or not they had won their game and we just had to win ours to keep the pressure up. I really felt we should have won the league and I think we deserved to win it.

The team showed a lot of character in the Gloucester game last week, coming from behind twice to win it. What was the atmosphere like in the dressing room like?

We were a bit gutted because we didn’t win the league and we deserved to, I think we’ve shown that this season, but as for the play-offs we thought we could win and tonight we’ve lost, but I think we can definitely turn it around and win the next two games and get promoted. We can beat anyone at home, so I’m confident we can do it, yeah.

Chorley and Boston drew 0-0 in their game tonight. Which team would you prefer to face in the final if we get there and do you fear either side?

I don’t think we fear anyone really. A lot of teams play long ball on not so great pitches but at our place we get the ball down and pass it well and that’s our advantage. I think we’re good at adapting against different teams. We’re two ‘must win’ games away from promotion and i’m confident we can do it. Destiny is in our our hands. We’ve got to win.

Looking back six or eight months ago, would you have believed that you’d be in the position that you’re in now?

To be honest, with the team we had at the beginning of the season I knew we could challenge but we didn’t expect to finish so high at the start of the season. It’s a big achievement for the club and the players at the club and I think it just shows the club is going higher and higher. The backing with the new ground and the current ground just shows we’ve got support and hopefully we’ll get promoted and give the Chairman a repayment by playing in a higher league next season.