Joe Joined the Coasters on a short-term deal in the summer before signing a new one-year deal with the Club. Joe came through Everton and Rochdale’s academy systems and signed his first professional contract with Scottish Premier League outfit Dundee United in 2017, before returning to England to sign for Warrington Town. Piggott impressed at […] 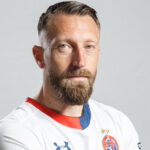 The experienced forward joined the Coasters in summer 2021 following five successful seasons at Queen of the South. Throughout his time in the Scottish Championship Dobbie was nominated for Player of the Season on two occasions, and in 2019 he scored the most goals for the club in a single season ever (43 goals). In […] 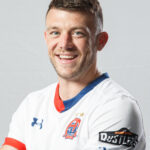 In early October 2020, the powerful striker arrived at Mill Farm on the back of a promotion-winning campaign with Altrincham FC, putting pen to pen paper on a one-year contract with a further year option in the clubs favour. The 29-year-old appeared in 139 career appearances whilst at Alty, scoring 70 goals along the way.  […]