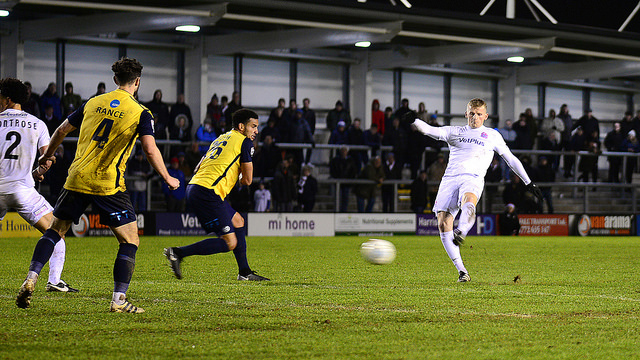 AFC Fylde boss Dave Challinor admits his side ‘got out of jail’ after earning a 1-1 draw against Ebbsfleet United.

Top scorer Danny Rowe crashed home a 89th minute equaliser in the final home game of the year as the Coasters nicked a point.

Challinor said: “It’s funny how football works out because away at Ebbsfleet is probably the best we’ve played all season and we only came away with a point.

“This time around, we weren’t great so the point has become a good one. We kept on plugging away and eventually a chance dropped to Rowey and he’s smashed it in.

“You have to adapt to conditions and oppositions and we won the league last year by being the most adaptable team.

“We would dig in, especially around the busy christmas period when pitches aren’t at their best, and that’s what we have done this weekend.

“Nobody stands out but at the same time anyone can beat anyone. That should give everyone hope because the results are all over the place.”