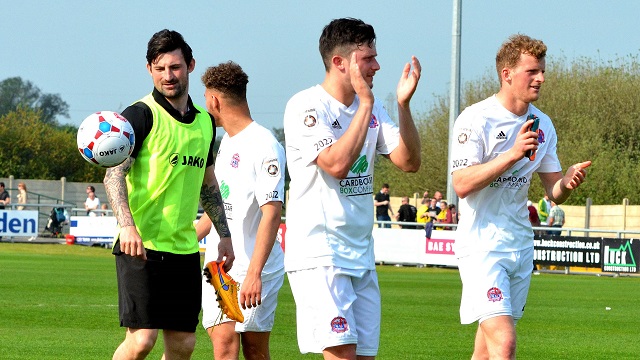 AFC Fylde face arguably the biggest game in their history this weekend as they take on North Ferriby United for a place in the Vanarama National League.

After coming through a gruelling semi-final against Harrogate Town, the Coasters travel to the North East hoping to reach the top tier of the Non-League pyramid for the first time.

One man who has been there, done it and got the t-shirt is former Coasters midfielder Joe Booth.

Fan’s favourite ‘Boothy’ has played his part in several of Fylde’s promotions during his eight years with the club, but is now looking forward to cheering on the Coasters from the sidelines rather than being in the thick of the action.

“Nerves play a massive part as a player and as a member of staff,” admitted Booth. ““I’m not actually nervous this time around though. As a fan, I’m much more excited whereas when you’re a player, you’re thinking “Am I gonna win? Am I gonna lose? Am I gonna play well?” and all the other emotions go through you.”

Booth isn’t the only member of the Coasters set-up that knows all about play-off campaigns. Manager Dave Challinor has experienced both the joys and heartbreaks that the lottery of the play-offs can throw up, whilst full-back Stephen Crainey played in Blackpool’s 3-2 victory over Cardiff City in 2010 to reach the Premier League.

Booth believes the experienced members of the squad can play a crucial role over the course of the week in terms of preparations for the final.

“It’s massive because, in these types of scenarios, it tends to be a mistake that costs the game,” added Booth. “They (the more experienced players) have to let the less experienced lads know what to expect, but at the same time, the beauty of having young players in your team is that they are fearless.

“Some of them don’t even worry about things because they’re too young to worry in some respects.

“The people like Stephen Crainey, Tom Hannigan, Danny Rowe, Richie Baker and Brad Barnes need to prepare them and help them through.”

North Ferriby have already got the better of Fylde twice this season and Booth believes that the hosts won’t change their style for the final showdown.

“They’ll go direct and they’ll go from there. I can’t see them playing tiki-taka football.

“We would of course have liked the final to have been at home but it’s a one-off game. They’ve got a slight advantage in that they’re at home but to me that means nothing in a game like this.

“We’ll go away and prepare and then it’s a game of football. It doesn’t matter if you’re playing at Wembley stadium, North Ferriby’s ground or Fylde’s ground. You have to beat whoever’s in front of you.”

Fylde’s 1-1 draw against Harrogate was the final game to be played at Kellamergh Park before the Coasters move to Mill Farm ahead of next season and Booth recalled some of the many memories he had of playing in front of the Fylde faithful over the years.

“Every promotion was special and I had three with Fylde. The 5-0 win over New Mills and the penalty shootout against Ashton were very special. I scored twice in the New Mills game which I’m very proud of. The first one was always special because I’m the only player still at the club who was involved in it.”