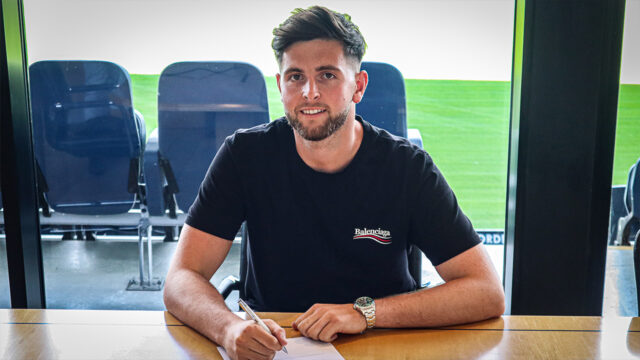 AFC Fylde is delighted to announce the signing of defender Pierce Bird, who will join the Club on a two-year deal, with the option of a further year in the Club’s favour.

Pierce signs for the Club from Kings Lynn Town for an undisclosed fee and becomes Fylde’s fourth signing of the summer, beating off strong competition for his signature.

Beginning his career at Dunkirk, Bird made a name for himself playing for their reserve side, where he notched six goals in 30 appearances and earned a deal at Notts County after impressing on trial.

A three-year stint with the Magpies led to various loan spells with Leek Town, Alfreton Town, Grantham Town and Boston United before moving to Eastleigh.

Following the expiry of his deal at the Silverlake Stadium, the 23-year-old opted for a move to Kings Lynn Town, but after just one season with the Linnets, and a short-term loan at FC Halifax Town, the central defender joins Connor Barrett, Joe Rowley & Jordan Cranston in making the switch to the Fylde Coast.

James Rowe was happy to add Bird to the ranks and said: “Pierce has had some promising spells in the National League, and as such, we had some strong competitors for his signature.

“We are delighted to secure his signature, but the hard work is ahead.”

After putting pen to paper, Bird said: “I’m delighted. There was interest from last week and to get it done now before the start of pre-season is perfect.

“It helps when a club is on the up, and you know it’s only heading in one direction, and I obviously want to be a part of that.”