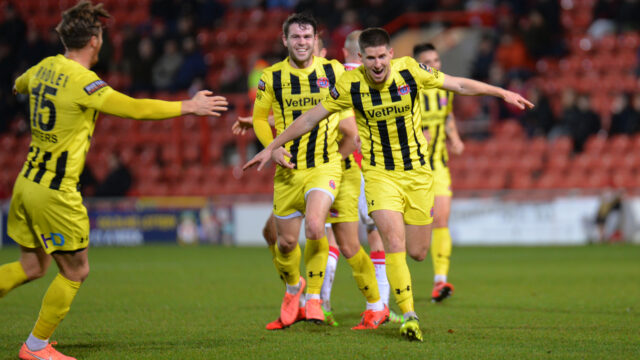 Philliskirk: “I am delighted to stay here.”

The 29-year-old has committed his future to the club despite offers from elsewhere, and gave his thoughts to afcfylde.co.uk after extending his stay.

“I am delighted to stay here,” Danny told us. “I was in a position where I had a couple of options, one of those was with a league club, so I was fortunate to have that. I have enjoyed my time at Fylde over the last two years, so I wanted to be here.

“I’ve spoken with Jim and Jonty a few times over the summer and the plans sounds great. I also have a good relationship with the Chairman as well as Jonty and Jim, so it’s great to be part of it still.

“Little things are important to me, such as being close to home and my family, I also coach in the local area and I enjoy that, and I like the club and the set up here. There’s a good positive feeling around the place despite the position we are in.”

The current situation regarding what division the Coasters will be playing in next season is ongoing. Whatever the outcome may be, Danny has the full belief that the club will look to challenge at the right end of the table.

“We obviously don’t know what league we will be in but if it is worst case scenario, we will all be looking to bounce straight back with the squad we have here.

“Everyone just wants to know our future now. It has been a yo-yo for the last three months and we’re still not sure what’s happening, but we are desperate to know either way so we can fully concentrate on what we need to focus on for next season and the task ahead.

“Whatever league we will be in there is always one objective at this club, and that’s to be at the top end of it. That’s the view throughout the whole club and we’ll be looking to do that.”

The squad were unable to finish the 2019/20 season due to the Coronavirus pandemic. Although the correct decision was made in suspending football, it did come at a time when the Coasters had come into form.

Philliskirk explained: “We have played many games this season where we felt we were on top and looking good, then small things go against you and we couldn’t keep the momentum.

“When we did get going, we were stopped from playing. We all really do think we would have been able to get away from the relegation zone so that summed our luck up. We had games in hand and the teams to play around us, but on the other hand we were down there for a reason as we weren’t good enough in the games we did play.

“The core of the team has played together for at least one season, the majority of us have been here for two. We know we’ve got good quality and we have strong relationships with each other, I’ve got every belief that we’ll be better next year.”

It’s a big summer off the pitch now for Philliskirk, as he looks to come back next season as fit as possible to continue commanding the game from his central midfield position.

“I’ve got an operation booked in for July. It is good timing for me really, as the season looks like it will start a little later. I will then hopefully be fully fit in time for the start of the season.

“I think I have been playing at 75 to 80 percent I think over the last two years as I’ve had the hernia problem, so this will be great for me to get back to what I feel will be 100 percent fit and ready to go.”