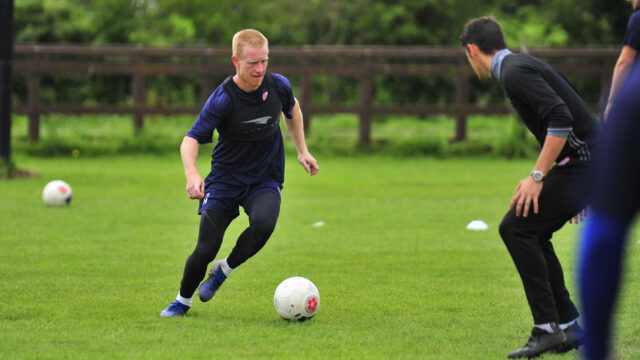 Perkins: “I will let my football and effort on the pitch do the talking.”

afcfylde.co.uk caught up with experienced midfielder David Perkins, after he signed for the Coasters.

The squad are now back in light training, as we prepare for the 2020/21 National League North campaign. Perkins, who was out of contract this summer following the expiration of his deal with Tranmere Rovers, is now looking forward to working with Jim Bentley again after their playing days at Morecambe.

On joining the club, Perkins said: “I have been watching Fylde over the last couple of years. The relegation last season was disappointing but I’ve kept a close eye on the project that they’re building here and now I can’t wait to be a part of it. I’ve had a proper look around the ground and the facilities made it a no brainer, really. I’ve played for a lot of league clubs and they don’t have half the set-up that we do here.

“I now want to help get the club into the league. I started my career with Morecambe so I have a non-league background to call upon which I am quite excited about. I know Jimbo well from Morecambe, I am going to have to get used to calling him the Gaffer now instead! He was a massive factor in me coming here, I also know Burkey [Luke Burke] and Jonty [Castle] both from Wigan as well, so this is a perfect fit for me.”

Perkins has played over 700 matches in his career. The now 38-year-old feels he still has plenty left to offer, and his performances in Sky Bet League One last season prove testament to that.

“Hopefully I can help the young lads,” he explained. “We can take from my experiences, people such as Chris Neal and Nathan Pond can be a massive help as well, and we will have to call upon that. There will be tough times as in football there always is, I am yet to see a team that doesn’t go through the odd 10 minute spell, or even a full game and have it tough at some point.

“I hope the lads will be able to trust me out there when I say ‘come on boys we’ve got this’ and step it up a bit. I know how to see games out. Whether that’s by trying to get a goal or shutting up shop, I hope I can read how it will play out and be a part of helping out there.”

‘Perks’ as he has been affectionately known throughout his football career, is originally from Heysham in Lancashire. Despite plying his trade across different clubs and areas, he admits it is now nice to be ‘home’ by signing for the Coasters, despite interest from elsewhere.

“I love football. I’ve travelled around playing football over the place, I have often put myself first in a selfish way as I was willing to travel anywhere to play. I have had interest as far away as India! I am a football person but this was a perfect fit and I am happy it is local for me. Moving around brings its own experiences – but now I can live at home, I am only 20 minutes away which is brilliant, I’ve got my kids there and I can have a home life as well as a football one now.”

So Perks, for those of us who aren’t too sure, what’s your style as a player?

“Tough question that and one I find hard to answer! I am as honest as the day is long and I will make sure I always give my all. Some fans at various clubs will see the term ‘experienced’ as overrated, so I will let my football and effort on the pitch do the talking for me.”

And finally, the ambition of the club was yet again a major factor in securing another high profile player to come to Mill Farm.

Perkins explained: “There is nothing worse than signing for a new club and they tell you their aim is just to stay in the league. That’s kind of a downer straight away as they believe they will be down the bottom, if you get me.

“For Jim, Jonty and the Chairman to come out and say they want back-to-back promotions, that’s the aim, that’s what you’re all going for and be open about it, it’s brilliant, it makes you want to come and be part of it from minute one. We all know it won’t be easy to do that and there’s plenty of other clubs that want the same, but at least we know in our walls that everyone is together looking to achieve that.”