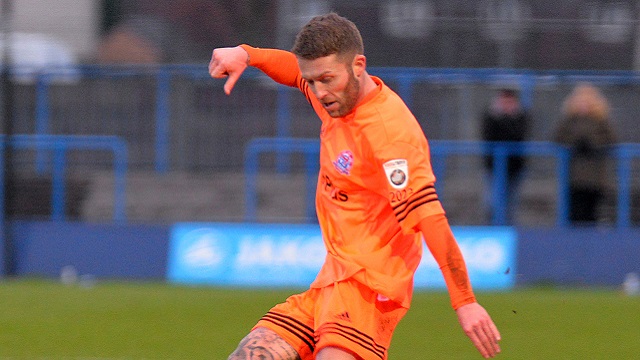 The Coasters slipped to just their third league defeat of the season at the Tameside Stadium and saw their lead at the top of the National League North cut to six points.

Both title rivals Kidderminster Harriers and Chorley picked up maximum points from their respective games and Kennedy is keen to put things right this evening at Mill Farm against Alfreton Town.

Kennedy said: “It was a frustrating game to say the least. We’d had a good week’s training and a lot has been said in the dressing room.

“First and foremost, we need to get back to the basics and defend as a unit and I mean throughout the team. I’m not just talking about the back four. The performance wasn’t acceptable and the first thing we have to do is put things right tonight.

“I think we were pretty comfortable until we conceded two goals late in the first half. I think we were comfortable throughout the game to be fair, it was just the individual errors and silly mistakes that have been costing us all season really. The only way we can rectify that is by working hard on the training ground and making sure that these mistakes stop”

Injury to captain Josh Langley forced manager Dave Challinor into a half-time reshuffle at the weekend and Kennedy was moved into the middle of defence, a position he has played before.

“I’ve played at centre-back before at various points of my career so it wasn’t that much of a shock to be playing there. The gaffer had to change the shape due to circumstances. We got ourselves back into the game and then unfortunately conceded another sloppy goal at the end.”

Despite the defeat, the Coasters still hold an enviable position in the league, and Kennedy is keen to bounce straight back as his side continue their push for promotion to the National League.

“Every game is important now. We’ve lost the game at the weekend but it’s not the be-all-and-end-all. We’ve got to go again for the game on Tuesday and go and put things rights.

“We’ve had ‘bounce-back-ability’ all season when we have lost and we’ve always set up another little run. We have another great chance to do that again now. The aim is to win tonight and Saturday and go onwards from there.”