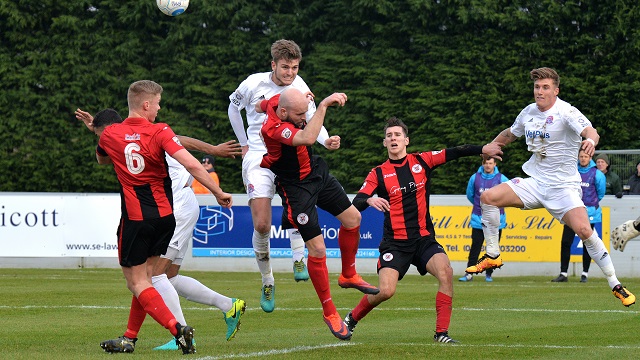 AFC Fylde new boy Laurence Maguire could not hide his delight after making the perfect start to his Coasters career.

The 20-year-old Chesterfield defender put pen to paper on a loan deal with Dave Challinor’s title-chasers just 24 hours before making his debut in the crucial 3-1 victory over Brackley Town.

Fylde have been plagued with injuries at the back over recent weeks and Maguire was thrown straight into the starting line-up as the Coasters extended their lead at the top of the National League North to an incredible ten points.

Maguire said: “I’m delighted to be here and three points on my debut is all I could have asked for. I really enjoyed the game too so it has been a good start so far.

“I expected to get plenty of long balls into the box and to have their strikers backing in trying to unsettle us and that is exactly what we got. So to get maximum points from a tough game was massive for us.

“Our third goal was vitally important. A two-goal lead in football is massive because you can settle down and try and play. It helped relieve the pressure on us after they had pulled one back a minute after we got our second goal.

““I trained for a couple of days with the squad towards the end of the week so it was no problem going into the team. I have played a few times at left-back in the past but centre-half is my position and it was great to go straight in and play in my preferred position.

The youngster, who has made 11 appearances in League One this season for Chesterfield, lined up alongside Steve Williams at the back and admits the experienced defender helped him through the game.

“Willo is very experienced and he really helped me in the lead up to the game in training and to have him next to me during the game made a big difference for me. He was constantly talking to me and helping me through the game.

“All the lads made me feel very welcome in training on Thursday and Friday and the main thing was to go out there on Saturday and get the three points to put our title hopes back on track.”