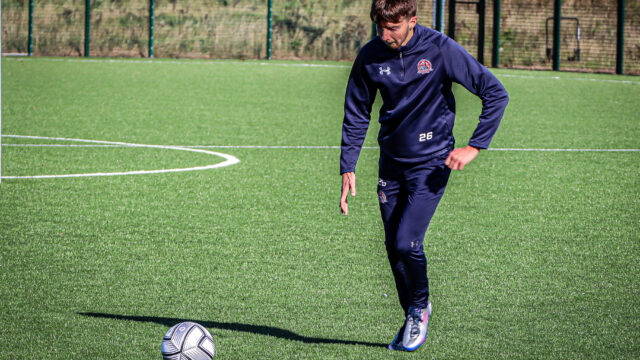 Young midfielder Owen Robinson has extended his loan at Warrington Rylands until January after a successful initial one-month loan spell.

After signing his first professional deal in the summer, Owen signed for Rylands to gain more experience and aid his development further, and he has flourished during his time there, prompting both clubs and player to agree an extension.

After Owen extended his loan deal, Coasters boss Jim Bentley said: “Owen has had a successful spell at Warrington. I’m in regular contact with their manager, and they are pleased with his performances.

“I’ve been to watch him myself a few times, and he is definitely improving with playing regular first-team football.”

Warrington Rylands manager Dave McNabb is delighted to keep Owen at Gorsey Lane, and he expressed: “I’m over the moon that Owen’s loan has been extended. Owen has been brilliant for us since he came in.

“His work rate is second to none, and his ability on the ball has been a huge asset. I’m really excited to continue working with Owen, and I’m honoured that Jim and Fylde have trusted us to continue to play a part in Owen’s development.”

Owen will return to Mill Farm on the 8th January 2022.

We would like to wish Owen all the best during his loan spell at Gorsey Lane.