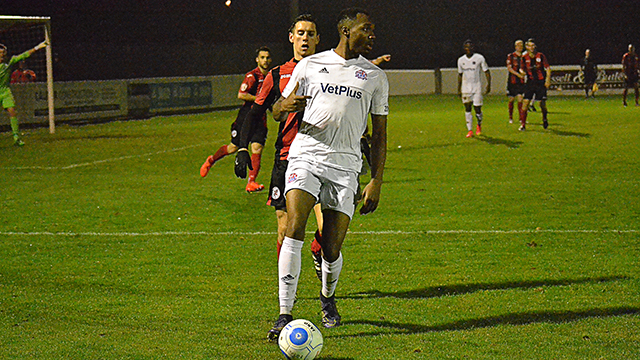 ‘We owe the manager’ – Bohan

AFC Fylde midfielder Bohan Dixon believes the squad are keen to make amends for the midweek disappointment in the FA Trophy.

Fylde suffered their worst defeat of the season as they crashed out of the competition at the hands of Brackley Town and now turn their attention back to the National League North programme with a trip to Gloucester City.

The Coasters currently sit seven points clear at the top of the league table, but Dixon insists they owe manager Dave Challinor a performance.

“Obviously, we’ve got to get our heads down now,” said Dixon. “If we go from now, we’re seven points clear. We’ve got a good head start on other teams and we’ve been training well all week. We’re going to crack on with the season and go at it.

“Normally we would be off on a Wednesday but the gaffer is not messing around. He told us we had to be in and although everyone was a bit tired, we have to be ready to go. We owe him a little bit after the Brackley result.

“Everyone is keen to bounce back and show what we can do, as we have done for most of the season. No-one likes to get beat 4-0 away from home, so everyone is really up for it. We’re going to go to Gloucester and we going to make sure that we get the win.

Towering midfielder Dixon has been a regular in Challinor’s side this season, but is keen to add more goals to his game.

“The games have been coming thick and fast so you have to set up differently in some games than in others. Everyone in the squad is fit so we’ve just got to keep training well and personally I try my best to keep my place in the squad.

“I see my best position as being just behind Rowey, that’s where most of my goals and my assists tend to come from.

“That said, I don’t even know how long it is since I’ve scored – I need a goal! I haven’t scored for a bit and I need to get back on the scoresheet and add a few more to my tally.”

The Coasters have a typically busy festive period ahead and Dixon is hoping it is a merry Christmas for his side – despite the cold weather!

“No-one looks forward to the cold weather around this time of year, but we’re really up for it. We have a little break over Christmas because we’re not playing on the 29th when we usually would.

“Then it’s Chorley at home on Boxing Day and then Chorley away in the New Year. Hopefully, through that period, we can train well and beat them at home and at their own ground as well.”