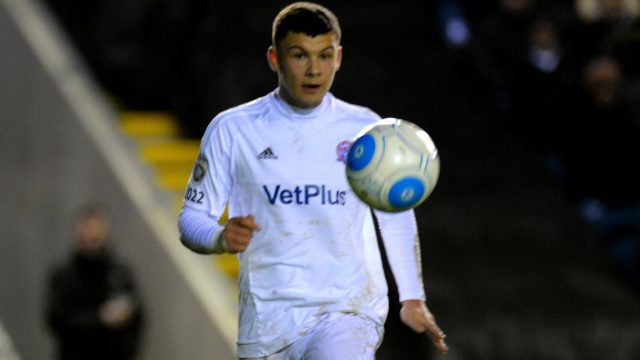 “We owe the fans on Sunday” – Wilson

The Magpies inflicted a first home defeat of the season on Fylde in front of a record attendance at Mill Farm on Boxing Day.

Despite the disappointment, the Coasters still lead the pack in the National League North by six points heading into the return fixture at Victory Park in the new year.

Wilson, currently on loan from Blackpool, believes that whilst his side had their fair share of chances, the visitors were simply more clinical in front of goal.

“Everyone was really excited in the lead up to the game but we just didn’t turn up on the day I guess. They wanted it more than we did.

“The first goal changed the game from our point of view. We started on the front foot, but they like to defend and once they got the first goal it was always going to be difficult.

“We dominated for the first twenty minutes and looked like scoring ourselves, but they killed us on the counter attack and took their chance when it arrived.

“The second goal was definitely avoidable. It was a silly free-kick to give away and then their lad is left unmarked at the back post and finishes well to be fair to him.”

Wilson expects another feisty encounter at Victory Park on Sunday and believes his side owe the supporters an improved display.

“It’s a local derby and the atmosphere and the fans made it more intense so it was always going to one where the bloods pumping and you expect a few challenges and bookings. I’m sure the return game will be the same.

“We see it as a good thing that we face each other again so soon. We owe the fans a better performance because so many came down on Monday. Hopefully we can give them something back on New Year’s Day and get a better result.”

Over 3,800 supporters turned out at Mill Farm on Boxing Day and Wilson revelled in the occasion.

“It was brilliant to play in front of that many fans. It was my personal record too – I’ve never played in front of a crowd like that before.

“A massive well done to the fans, they made it a really special occasion. Hopefully new fans that came enjoyed the day and we can start to make it more of a regular occurrence.”