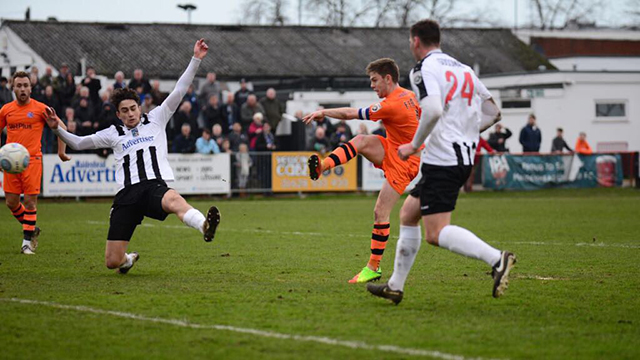 Halifax consolidated their National League status aided largely by an excellent run of form in the first couple of months of the season which briefly saw them top of the table. A run of just one win in 13 games saw manager Billy Heath lose his job and he was replaced by current boss Jamie Fullarton. The Coasters were beaten at The Shay in September despite taking the lead through Danny Rowe, but secured a comfortable 2-0 win at Mill Farm in March thanks to goals from Jonny Smith and James Hardy. The Shaymen have confirmed that striker Tom Denton and the long serving Scott McManus will leave the club in the summer.

After flirting with promotion for several years, Harrogate finally achieved National League status after a 3-0 win over Brackley Town in the play-off final. Striker Dominic Knowles ended the season in sensational form scoring no fewer than nine goals in the final three games, including all five in a 5-0 win over Curzon Ashton. Despite having to settle for the league’s runner-up spot, the Yorkshire outfit were by far the highest scoring team in the National League North, notching 100 league goals with five players getting into double figures. With their attacking style of play, coupled with their new state of the art 3G pitch, Simon Weaver’s men will not be looking to simply make up the numbers next season.

It was a rollercoaster of a season for the Pools with off the field issues dominating their season. The club were sold to former Darlington chairman Raj Singh earlier this year, narrowly avoiding liquidation. On the pitch the club started slowly and manager Craig Harrison was sacked in February despite a brief upturn in form from September to November. Former player Matthew Bates was put in temporary charge before taking the job permanently at the end of the season. The Coasters earned their first league win of the season with a comfortable 2-0 win at Victoria Park over the August Bank Holiday weekend and looked to be on course for a league double before two late goals salvage a 3-3 draw for Pools.

The Hawks earned National League status for the first time with a dramatic injury-time winning goal against Concord Rangers on the final day of the season. Their promotion was spearheaded by 23-goal striker Jason Prior with experienced ex-league players Brian Stock, Wes Fogden and Matt Tubbs providing support. Havant & Waterlooville are perhaps most well-known for famously leading Liverpool at Anfield in an FA Cup Fourth Round tie in 2008 before eventually succumbing to the Reds 5-2.

Last summer saw a big change at Leyton Orient with owner Francesco Becchetti selling the club to boyhood Orient fan Nigel Travis. After a promising start the East Londoners slipped down the table leading to the sacking of manager Steve Davis and the eventual appointment of former Tottenham Hotspur defender Justin Edinburgh, who managed to steady the ship at Brisbane Road. Orient’s form improved towards the end of the season which included a 1-0 win at Mill Farm in February. The Coasters had picked up all three points in September thanks to Danny Rowe’s superb brace. With an array of experienced former football league players including George Elokobi, Josh Coulson and Jobi McAnuff in their ranks Orient will likely be amongst the favourites for promotion once again next season.

Part-time Maidenhead United came into the National League on the back of winning the National League South title and made an instant impression beating Hartlepool live on BT Sport before a 4-1 win at Mill Farm thanks to prolific striker Dave Tarpey. Tarpey would join Barnet on transfer deadline day and the Magpies slowly slipped down the table but would never be in any serious threat of being dragged into a relegation dogfight. The Coasters got revenge for their defeat early in the season with a 2-1 win from behind in December thanks to goals from Lewis Montrose and Jack Muldoon. The club are managed by West Ham United legend Alan Devonshire and their York Road home is the world’s oldest football ground continually used by the same club.