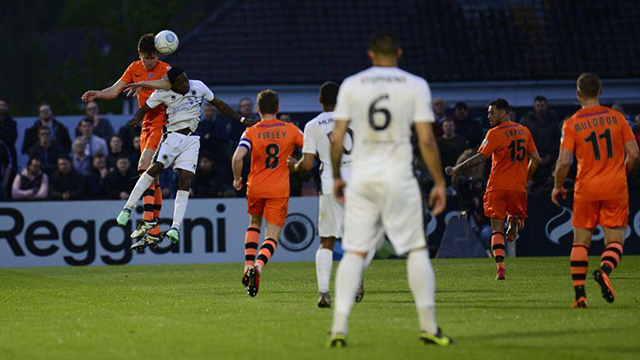 The summer break is here, World Cup action is set to descend upon us, however the new National League season is just around the corner and here we preview the clubs set to face the Coasters in 2018-19. Here we take a look at the first six…

The Shots once again qualified for the National League play-offs in 2017-18 but again fell at the first hurdle, losing a dramatic penalty shoot-out to Ebbsfleet United. A late Will Evans header condemned the Coasters to a late defeat in November, but revenge was sweet at Mill Farm as Danny Rowe’s perfect hat-trick inspired an amazing 7-1 win in March. Key first team players such as Cheye Alexander, Jim Kellerman and James Rowe have all left the EBB Stadium in recent weeks and manager Gary Waddock faces a crucial summer of recruitment to make sure the Shots are once again in the mix for promotion to the Football League.

Barnet dropped back into the National League after a three year absence on the final day of the season despite a 3-0 win over already relegated Chesterfield. Morecambe’s draw at Coventry was enough to condemn the Bees to non-league football, but they have a rich history at this level. They have won the National League a record three times, most recently in 2015 with striker John Akinde grabbing an impressive 31 goals in the process. Akinde has recently been transfer listed by the club but there is still plenty of fire power there with former Maidenhead United striker Dave Tarpey set to return from injury in time for August. The Coasters have never met the Bees in a competitive fixture before.

The Bluebirds struggled last season surviving on the final day despite a home defeat to Chester. A long winless run at Holker Street was a key reason for their struggle which lasted from October to April and finally ended with a 3-2 win over Eastleigh. Only three players are certain to be plying their trade at Holker Street next season including former Premier League striker Grant Holt. Former Forest Green Rover manager Ady Pennock has a busy summer ahead of him as he tries to assemble a squad capable of at the very least surviving or possibly challenging for the play-offs as the Bluebirds did during the 2016-17 season.

Boreham Wood were one of the big surprises in the National League last season finishing in an impressive fourth place and breaking Fylde hearts in the play-off Eliminator round before finally succumbing to Tranmere Rovers in the final at Wembley. Luke Garrard has built a squad with a mix of strength, power and technical ability which few got the better of last season. Forwards Bruno Andrade, Angelo Balanta and Morgan Ferrier will cause problems for any defence whilst David Stephens, Kane Smith and his namesake Grant make the Wood a very stubborn defensive unit. The big question is how many of their key players Garrard can keep at Meadow Park.

Diaz Wright’s penalty secured an instant return to the National League for the Essex club in last week’s play-off final penalty shoot-out win at Hampton & Richmond Borough. The Iron finished the regular season in sixth place and won promotion the hard way with wins at Hemel Hempstead and Dartford before their final victory. A trip to Cressing Road will be a first for the Coasters having never met in a competitive fixture before.

The Ravens narrowly missed out on a play-off place last season and proved they are a match for any side in the National League with some impressive wins including a 6-1 demolition of Leyton Orient in August. Neil Smith’s side were the third top scorers in the division with only the Coasters and Tranmere Rovers rippling the back of the net more frequently. Midfielder Josh Rees grabbed an impressive 16 goals with winger Louis Dennis also chipping in with 13 strikes to his name. The Coasters gained four points from Bromley last season. A first league goal for youngster Serhat Tasdemir earned a 2-2 draw at Mill Farm whilst Jack Muldoon’s first half strike earned a 1-0 win at Hayes Lane in January.