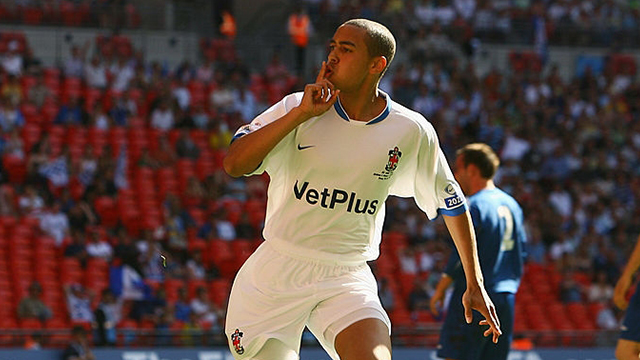 On this day … Wembley win!

Ten years ago to the day, Kirkham & Wesham (now AFC Fylde) lifted the FA Vase trophy at Wembley after a dramatic 2-1 victory over Lowestoft Town.

Relive all the action here…

Teenage substitute Matt Walwyn etched himself into Kirkham & Wesham folklore with a late brace to beat Lowestoft Town in the FA Vase final at Wembley.

Suffolk side Lowestoft had looked set for their first Vase triumph thanks to Phil Thompson’s early own goal.

However 17-year-old Walwyn stepped off the bench with 11 minutes to go and looked set to force the game into extra time when he converted Sean Paterson’s ball with six minutes left.

And he sealed the victory from close range deep into stoppage time.

North West Counties League Division Two side Kirkham got off to the worst possible start when Thompson’s looping header flew over goalkeeper Pete Summerfield in the 10th minute.

But the Lancashire side, in their first-ever campaign in the Vase, dominated the rest of the first half, with Mark Wane wasting a good chance and Paterson seeing his brilliant volley hit the crossbar and bounce down on the line.

After the break, Kirkham continued to dominate although Bradley Hough had a chance to seal the tie for Eastern Counties Premier Division side Lowestoft, but fired over.

Paterson, Wane and Paul Eastwood all missed chances in a desperate goalmouth scramble and it looked likely to be Lowestoft’s day.

However, in the 79th minute, manager Mick Fuller brought on Walwyn, who had scored the goal that sealed their place at Wembley, and the decision changed the game.

And the A-level student sealed the Vase for the 10th-tier side when Paterson unselfishly set him up, and he could not miss.

“There isn’t a better feeling. It’s unbelievable. We’ll be taking the trophy back home with us and that’s the main thing.”