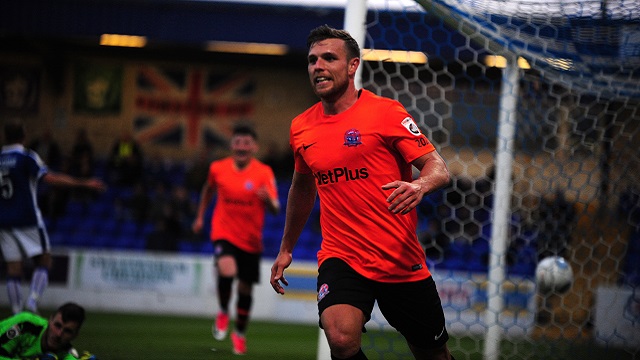 No stopping Jack in the box!

Summer signing Jack Muldoon was delighted to get off the mark in AFC Fylde’s 1-1 draw against Chester on Tuesday night.

Muldoon joined the Coasters from Lincoln City in July after helping the Imps to the National League crown.

The frontman opened his goal account for the club with a neat finish at the Swansway Chester Stadium as Fylde continued their unbeaten start to the season.

Muldoon was pleased with the result on the Welsh border but admits there is still room for improvement.

Muldoon said: “I’m pleased with how the game went, I thought we did well and obviously it was good to get my name on the scoresheet so early into the season. There were areas that I think we need to work on though.

“We are two games in now and it’s a long season so we will have to work very hard in training in terms of our shape.

“I’m fairly happy with how the two games have gone it’s just been frustrating conceding goals straight after we have scored. We will need to address that quickly as a group and keep pushing in the right direction.

“It will be difficult again on Saturday at Ebbsfleet – the top flight of non-league is very tough.

“Personally I have a minimum target of the play-offs. We have to set our ambitions high and we won’t settle for an average season.”

Strike partner Danny Rowe is yet to notch in the National League after bagging 47 league goals last season but Muldoon admitted he wasn’t concerned and believes it is simply ‘a matter of time’ before the prolific striker is back amongst the goals.

Muldoon added: “Rowey has been quite isolated up top so far in the opening two games so we need to get around him better and give him the service that he needs.

“He got 50 goals in total last year so he is more than capable of scoring this season and I’m sure it’s just a matter of time before he starts banging them in again.”

Manager Dave Challinor has an array of attacking talent to pick from this term and believes Muldoon is capable of adding plenty more goals between now and the end of April.

Challinor said: “It was a good finish from Jack on Tuesday. I’m very confident that he will score goals for us this season and that he will work his socks off.

“He is playing a slightly different role to what he is used to and we have worked on that to get the best out of him.”