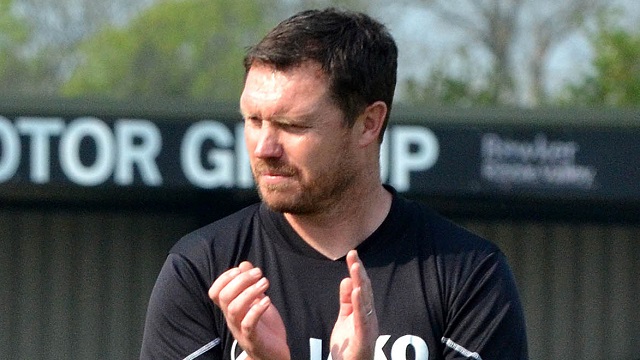 No added pressure for Colin

With the ongoing development at Mill Farm and the club set to go full-time next season, there’s the argument that AFC Fylde could face added pressure going into the next Vanarama National League North season.

Following two heartbreaking play-off campaigns, the Coasters have taken the step to full-time in a bid to help the club progress in its aim to get into the Football League.

Fylde assistant manager Colin Woodthorpe, however, believes that all the added pressure comes from outside the club.

“I suppose outside people may say that there is added pressure,” said Woodthorpe. “I suppose other fans might and other managers would say so as well to take the pressure off them. I don’t think we’ll have extra pressure on ourselves within the camp but we know what the club’s plan is for the future so we do need to be pushing on.

“Pre-season is always important. In the last few years we’ve played well against teams we’ve come up against in the Football League. In a way, it’s been good that they’ve been surprised by the standard that we play at. It also gives the players a sense of where they aspire to be so this is the standard that they need to be.

“It’ll be interesting because it will be a first year of being full time so having at least double the amount of sessions with the players to get them ready and make it an edge for when we do go into the season.”

Woodthorpe admits the step up has not always proved to be successful at other clubs but is optimistic that the Coasters will get it spot on.

“The proof will be in the pudding. It should be because we have more contact hours now. There is a well-wheeled out conversation about how it takes 10,000 hours practice to become good at anything. The rule of thumb is the more you practice, the luckier you get.

“Other clubs have gone full time and it’s not proved as successful as they probably would have liked. I think it is the makeup of the squad more than anything. They’ve gone for younger players. We’re definitely going for more of a mix. You’ll have some experienced players and some a bit younger but even our younger players have go experience of games behind them now.”

One of those young Coasters with plenty of experience to his name is Josh Langley and Woodthorpe is delighted that the club have managed to keep hold of the defender.

“Obviously he’s one of our more important players. You’ll have a few teams sniffing around but we’re in a position that we can fend people off. Unfortunately we’ve lost some that we would have liked to keep but hopefully we’ll be able to replace them with quality in terms of future improvement as the club moves forward.”

Woodthorpe believes there will be plenty of competition for Fylde next season in the battle for automatic promotion with the likes of relegated Halifax, Kidderminster Harriers and Altrincham from the Vanarama National League as well as promoted Darlington and Salford City

“This division is already billed as ‘Super League of Non-League.’ You’ve got Kidderminster, Altrincham who are under new management and Halifax who won the FA Trophy last year and were nearly in the play-off places as few years ago so one bad season shows them back in this division.

“Darlington have a big fan base and Salford have got plenty of backing and moment. Then you’ve got Harrogate and Stockport and Boston so that’s eight not including ourselves that will fight for those positions.

“Looking at it on paper, it should be a tighter battle for promotion. It’s going to be a fight to get out of this division. If you’re full time, you’ve got to hit full time and make sure that you ram that advantage home.”