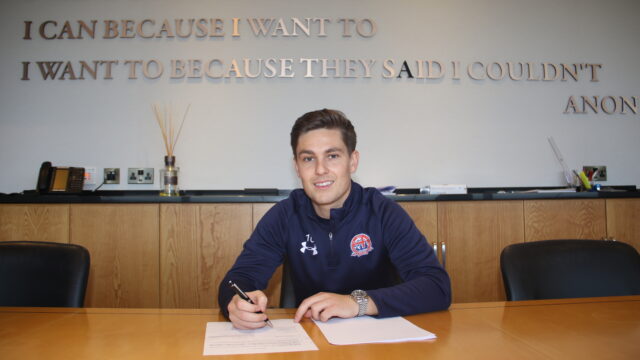 The Club is delighted to announce that Nick Haughton has committed his future to AFC Fylde by signing a contract extension that will keep him at the Club until 2023.

The 26-year old has established himself as a key player for The Coasters since his arrival in October 2018 and has started the season in fine form scoring 6 goals in 13 appearances.

Nick’s footballing journey began at Bolton Wanderers, before being released at the age of 15 and dropping down the pyramid to gain valuable first-team experience with non-league outfits, Curzon Ashton and Runcorn Town.

A string of impressive performances attracted the interest of Fleetwood Town, where the creative midfielder went on to play a total of 40 league games for the Cod Army, scoring one goal away at Sheffield United. A move to Salford City followed before he returned to the Fylde coast to join The Coasters in 2018.

AFC Fylde boss, Jim Bentley, expressed his delight at tying Nick down. Speaking to afcfylde.co.uk: “Nick has been excellent since I came to the football club. He’s a very talented player who can create and score goals and when he is in full flow, he’s a joy to watch.

“He has a good personality; is liked by the staff and his teammates; and is working very hard at his game to improve even further.

“I think it’d be fair to say that his name has popped up in other clubs recruitment departments, so we are very pleased he’s committed to our club and I’m sure he will help us be successful and move the club forward in the future.”