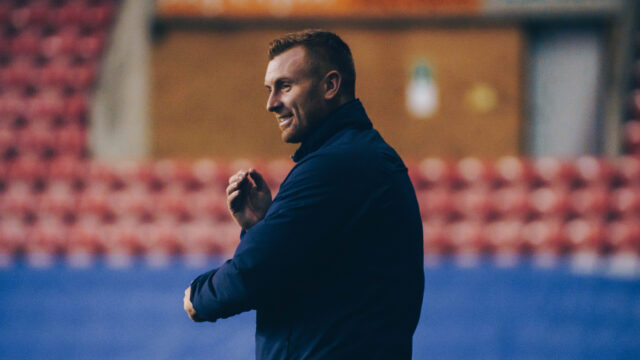 We are delighted to announce the appointment of Nick Chadwick as AFC Fylde’s assistant manager. Nick arrives from Wigan Athletic, where he held the position of Professional Development Phase (PDP) Coach.

Chadwick’s main role at Wigan was to ensure the development and pathway for young players to progress into the first team through his coaching, which he achieved with great success during a near-on five-year spell at the DW Stadium.

The 37-year-old, who as a player represented clubs such as Everton, Derby, Millwall and Plymouth, has a wealth of knowledge to bring to the set-up at Mill Farm and already has a strong relationship with current manager Jim Bentley after knowing each other for a number of years.

Speaking to afcfylde.co.uk after joining the Coasters, Nick said: “I am really delighted to be coming to the club. I got a call from Jim a few weeks ago to see if I fancied it and I definitely did! I know there’s been a few changes at the club and the direction we’re looking to go in, so I want to be part of that.

“This is a great opportunity for me as I have had some great success working with the academy at Wigan so this is now the next sensible step for me to take at a progressive club and be part of a journey, it’s exciting times.

“I have known Jim for quite a few years, we did our A Licence together.  We also played together for a short time at Morecambe and got to know each other on a personal and professional level through football so it will be great to now work together.”

On the appointment of Chadiwck, Jim Bentley said: “I’ve known Nick for many years and he’s a great professional, hard working and above all, a good person. After a successful playing career at many different levels.

“He’s now got plenty of experience coaching at U18 and U23 level and has done a fantastic job at Wigan over the past few seasons. I’ve seen him work, he’s highly rated, has produced and improved players and I’m looking forward to working with him.”