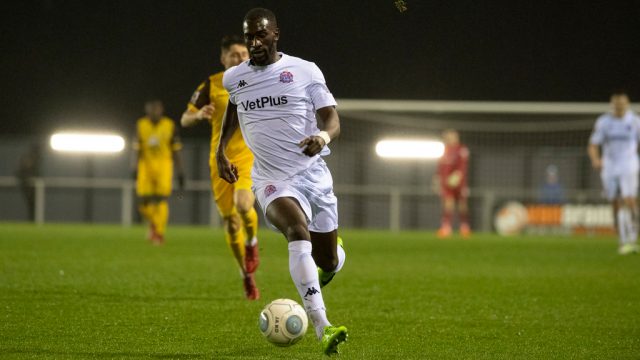 The club can confirm the news that Gime Toure has left the club.

Gime Toure signed a 6-month contract in the summer that expired on Christmas Day, and following this opted to look further afield.

Following the expiration of his contract, Gime opted to sign for London based National League side Sutton United.

Gime scored four times in 19 appearances this season, including against Sutton United in a 2-2 draw earlier this month, but had been unavailable since then with a reported injury.

“Gime moved on initially with our best wishes,” said Manager Dave Challinor. “He and his agent were looking for things that we as a club could not give him, nor had he earned as of yet.”

“The disappointment in his departure is that he had been ‘injured’ and ‘unable to train’ for the past two weeks, yet miraculously starts for Sutton less than 48 hours later, completing most of the game, which maybe tells people more about his character than they thought and probably explains why he’s no longer at the club.”

“We are actively looking to strengthen in midfield and forward areas, but with the window opening in January for other clubs, it’s likely that nothing will materialise until then.”

“We are in communication with clubs regarding quite a few players, and are hopeful we will get at least a few over the line to give us more options.”

Next up for the Coasters is a trip to Yorkshire, as we face Harrogate Town this Saturday 29th December.

Coach tickets for the game will run on two coaches (an early one and a late one) and are limited, and we advise booking ASAP to avoid disappointment.