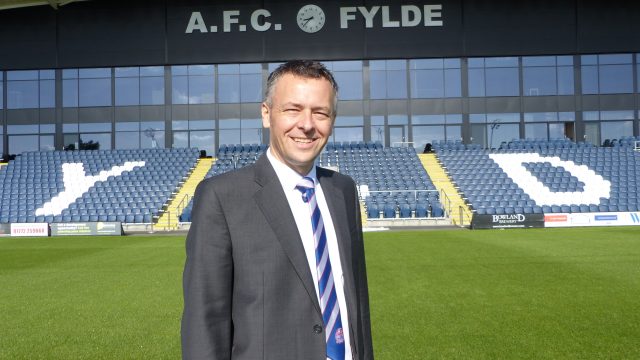 We are delighted to announce that Jamie Roberts will join the club in September as Chief Executive Officer. Jamie replaces Neil Joy who left the club at the end of June. Jamie has a wealth of experience having spent the last 10 years in various roles at Wigan Athletic.

“I am delighted Jamie is joining us. He has cut his teeth at Wigan working in various departments with a focus on player recruitment and development and I think he will really bring something special to the club. In many ways, the journey we are on is similar to the one Dave Whelan and Wigan embarked upon all those years ago and as such Jamie is familiar with many of the challenges we face.”

We sat down with Jamie and asked him some questions about his appointment.

What was your role at Wigan?

“I have been at Wigan for over ten years. My most recent role there was Head of Operations looking after the day to day running of the club. Previously to that I was with the Recruitment Department which I helped set up with former club captain Matt Jackson. I have also worked as Head of Performance & Analysis which was quite a ride as at the time Wigan were playing in the Premier League, Europe and winning the FA Cup. I have worked at Wigan for a long time, so it is always going to be a challenge coming somewhere new, but I know there will be similarities, and it is a challenge I relish.”

What will your role include?

“As Chief Executive Officer my main role is to help the club get towards the target of reaching the Football League by 2022. Alongside this I will be looking to set up a more formal scouting and recruitment network. The Academy already does some fantastic work and I will be aiming to take this even further as we work towards the Elite Player Performance Plan (EPPP) standard.”

What attracted you to the club?

“I first met David Haythornthwaite around 5 years ago and he is a very inspiring person. Since then I have always kept my eye on AFC Fylde and have seen their progression up through the leagues. It’s a progressive and ambitious club. It’s a club on the up and they want to ensure the club is run in the correct way. I am excited to be a part of it.”
What challenges can you see us facing?”

“The National League gets harder every year and the biggest challenge will be helping gain promotion. There are some clubs at this level with big budgets which makes it more challenging and we need to find our own way of overcoming them. Salford City have come up with quite a backing, add to that Chesterfield and Barnet along with the clubs who have been in and around promotion for a long time.”

“Despite this, I am confident that with the patience and the vision of the Chairman along with some correct decisions we will achieve our goal.”

Are there any areas you will be looking to Improve?

“One of the first things I will address is the recruitment, the key to being successful is finding good players, it’s something AFC Fylde has done extremely well in the past but given my experience I would like to step that up a level by increasing our scouting network and searching further afield for potential players.”