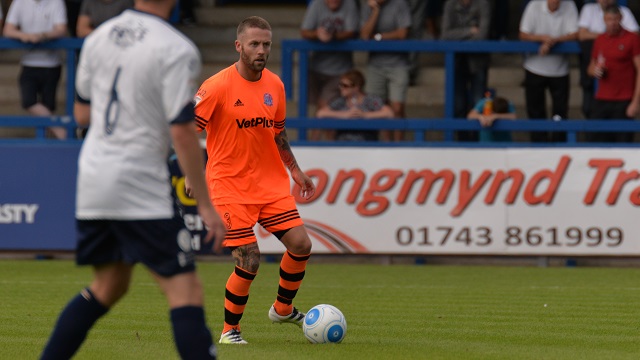 New boy Tom keeps it in the family

Kennedy joined the Coasters ahead of last weekend’s trip to AFC Telford United and made his debut just 24 hours later at the New Bucks Head Stadium.

And there’s no doubt that the left-back comes from impressive pedigree. His uncle Alan is a legend on the red side of Merseyside having made over 350 appearances for Liverpool whilst he also scored the winning goal in the Reds’ third European Cup triumph against Real Madrid in 1981.

However, the youngest of the Kennedy football clan admits it was his dad Keith who had more of an influence in him becoming a left-back.

“He (Alan) was an ultimate attacking left-back in an unbelievable Liverpool team but my dad played for ten years for Bury as well. It was more my dad coaching me from when I was a youngster trying to get me to play and always kicking the ball to my left-foot.

“I started off as a central midfielder but as you get older you get pushed into different positions and left-back became my position.

Kennedy was one of six debutants at Telford at the weekend, but the ex-Blackpool and Bury defender admitted that he wasn’t expecting to feature so soon into his Coasters career.

“To be honest, it was a bit of a shock to make my debut on Saturday. I only trained with the team on Friday and I hadn’t been doing too much. I’d been doing a lot of running but not too much ball work.

“To go into the team and into such an important game was a baptism of fire but the lads made me feel welcome and I slotted in well. In the end, it was a good performance and a good win.

“The heat didn’t really help with the fact that I haven’t had much training. In the last twenty minutes, I think that you could see that we were all starting to feel it but with the team going full time this season, it helped massively because, apart from myself, I thought the boys looked really fit.

The 31-year-old has represented no less than seven different teams at Football League level, making over 100 league appearance for both Bury and Rochdale as well as a spell with Leicester City between 2010 and 2012 and he hopes his experience can help drive Fylde’s ambitious plans.

“I’ve played through all the leagues and I think that experience at this level helps game management and helps the younger lads. Fylde are an up-and-coming club and they want to advance through this league and into the next league.

“I think anyone that’s played at a higher level can help coach the players and help bring them on and instil that winning mentality. Going full time is a big step and you’ve got to be at it day-in, day-out.  I think that throughout my career I’ve always been that so hopefully I can bring that to the table and we can go forward together.”