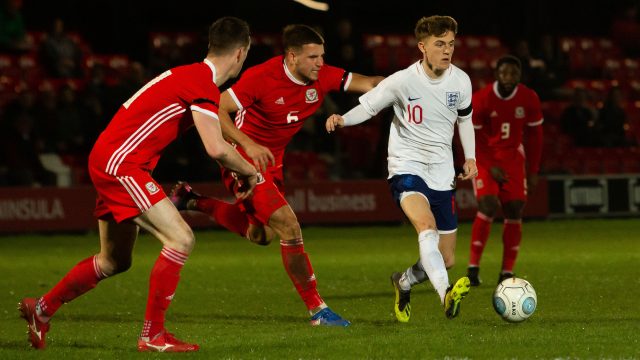 COASTERS no.7 James Hardy was the pick of the players on show last night, as England C drew 2-2 with Wales C.

England C, a representative group of players aged 23 and below from the National League and below, locked horns with the Wales C side at Salford City’s Peninsula Stadium.

Despite taking the lead twice, the Dragons twice restored parity, in the end earning themselves a draw.

Completing 90 minutes, Hardy earned his 4th cap in the process, and caught the eye of those in attendance. Hardy was named the Non-League Paper’s star player on the evening, in part for his contribution to the first goal, and his overall performance.

Playing an incisive pass across to the full-back, Hardy’s cross was diverted into the net by a Wales C defender, giving the Three Lions the lead.

Following Saturday’s FA Trophy semi-final against Stockport County, the friendly has given further playing time to Hardy, who has recently returned from a loan spell at Halifax Town.

Hardy will again feature this weekend at Stockport County, as the Coasters look to book a Wembley final on May 19th.

It’s set to be an amazing atmosphere at Edgeley Park, with hundreds of Coasters fans already booked onto the official club coaches.

Supporters can get their match ticket and travel for just £10, or free if under 16.

To take advantage of the travel and match ticket deal, read more here.

Thank you to Charlotte Tattersall at Salford City for the photos!