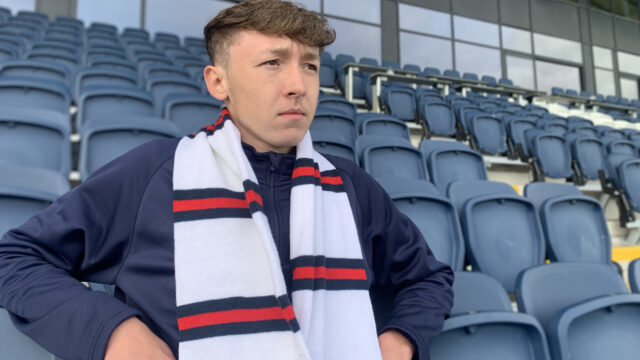 Nathan Shaw: “All the lads have welcomed me with open arms.”

Exciting prospect, Nathan Shaw has joined the club on a season long loan from neighbours Blackpool, as Jim Bentley bolsters his squad further.

Nathan arrives at Mill Farm with a strong pre-season behind him, gaining valuable experience with the Seasiders in those games.

After joining the club, Nathan gave his thoughts on why he chose to make the move to Mill Farm.

Shaw told afcfylde.co.uk: “It’s a club that’s going in the right direction, with great facilities, great management and everything around the club looks good.

“It helps that the club is local. I’ve spoken to a few of the lads who have played under the manager, they’ve said that he’s been really good for them, and I’m just looking forward to getting started here.”

The 19-year-old has been around the first-team squad at Bloomfield Road since signing a professional deal in 2019. He has also featured heavily in pre-season for Neil Critchley’s side, picking up vital experience along the way.

“I’ve really enjoyed it to be honest, getting some experience in pre-season playing left back, as I don’t mind playing there,” Shaw explained.

“I’ve enjoyed getting the minutes in such a short space of time, and it should help me with this loan move.

“I feel like I’m getting better all the time, Neil Critchley has helped me a lot at Blackpool, and I think Jim will also help me, so I’m looking to improve even more.”

Upon signing, Shaw explained what kind of player he is and what the Coasters fans can expect from him during his time at Mill Farm, as well as the message he has been sent, from Neil Critchley.

On himself: “I hope I can bring goals and assists because I like playing further up the pitch in attacking positions, beating players and hopefully I can help us be right up there to try and get promoted.”

On the message from Blackpool, he continued: “They’ve said to me go and get some minutes, do as well as you can and get some experience out on loan.”

Ahead of tomorrows game, Shaw had his first training session with the Coasters this morning, something he says was enjoyable, especially with a few familiar faces already in the dressing room.

“It was good – all the lads have welcomed me with open arms, it was a good standard and hopefully we can take that into the game tomorrow.

“I know a few in the dressing room – Danny Philliskirk was at Blackpool when I first went in, Sheldon Green was at Bamber Bridge when I went on loan there for a short while, so I do know a few of the lads in there. They’re all good lads anyway, so it has been easy to settle in.”

Tomorrow is the second qualifying round in the Emirates FA Cup, but for Shaw, it is a competition he has never played in before, which brings even more excitement for him.

He revealed: “It will be my first time playing in the FA Cup, so I am looking forward to it. It’s a good competition that everyone plays in at all levels, so hopefully we can do well in it and get to play some good clubs.”