My View From The Terrace | Steve Mclellan

The ups and the downs; the good and the bad; a rainy Kellamergh Park or a sunny Mill Farm – we want to hear about those moments you cherish.

In the second episode of ‘My View From The Terrace’, AFC Fylde Photographer Steve Mclellan takes us for a wonderful, nostalgic trip down memory lane, with his top ten images of all time.

1. Rowey didn’t celebrate his goals too much but here’s a great one I got of him celebrating in front of the FCUM fans. Fylde went on to win 2-3 back in 2016, and incidentally, one national newspaper did an online feature on him and used this picture – apparently, it came from the press association (PA). 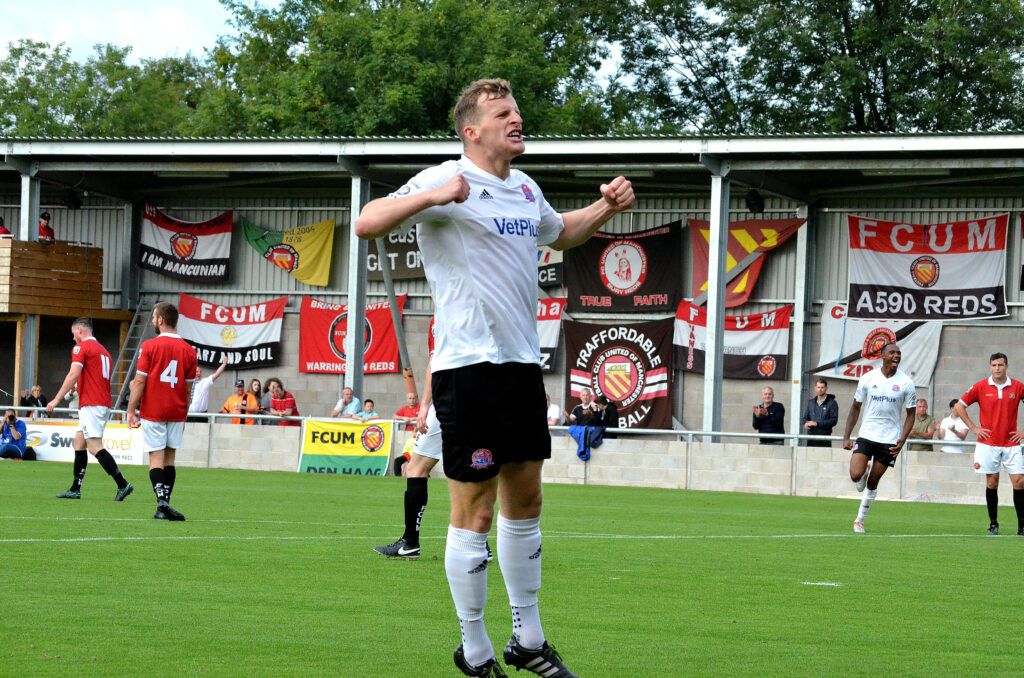 2. In 2018, Macclesfield Town would be promoted, but in January of that year they came up against a formidable Fylde unit that dented their ambitions. Fylde hammered them 6-0 on that day, and to put the cherry on top, my picture was featured on the front page of the Non League Paper. here’ Burkey, Jonny Smith and Jack Muldoon after Smithy’s goal. 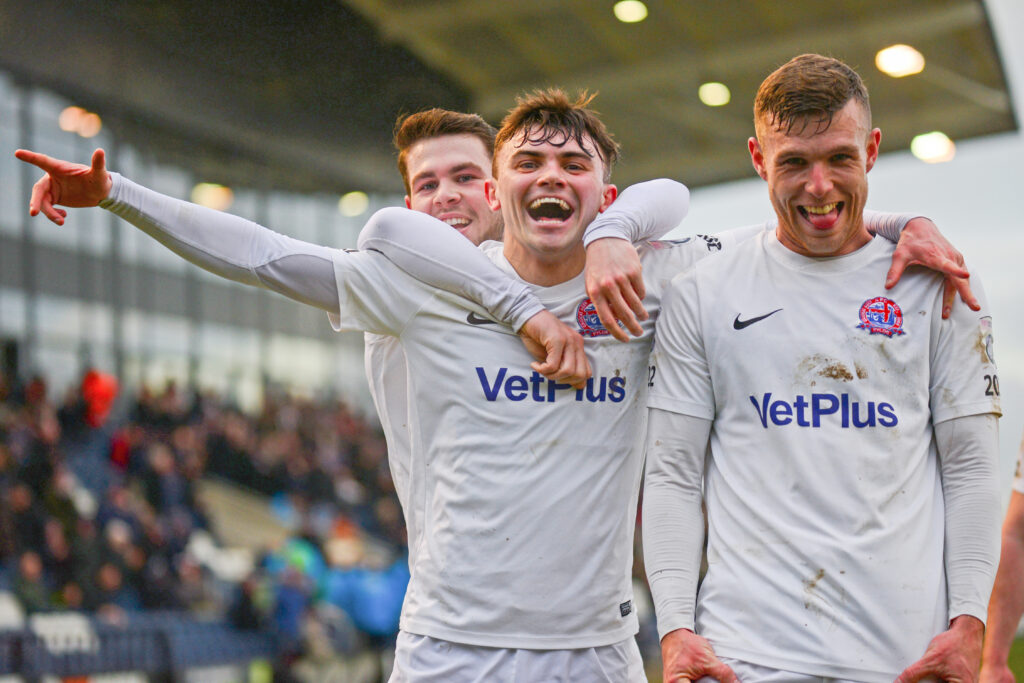 3. Fylde travelled to Solihull Moors in 2019 in the semi’s for a chance to play the final at Wembley, our match-winner on that day was ever-present Danny Philliskirk who scored a cracker of a goal sending the travelling Coasters into raptures. 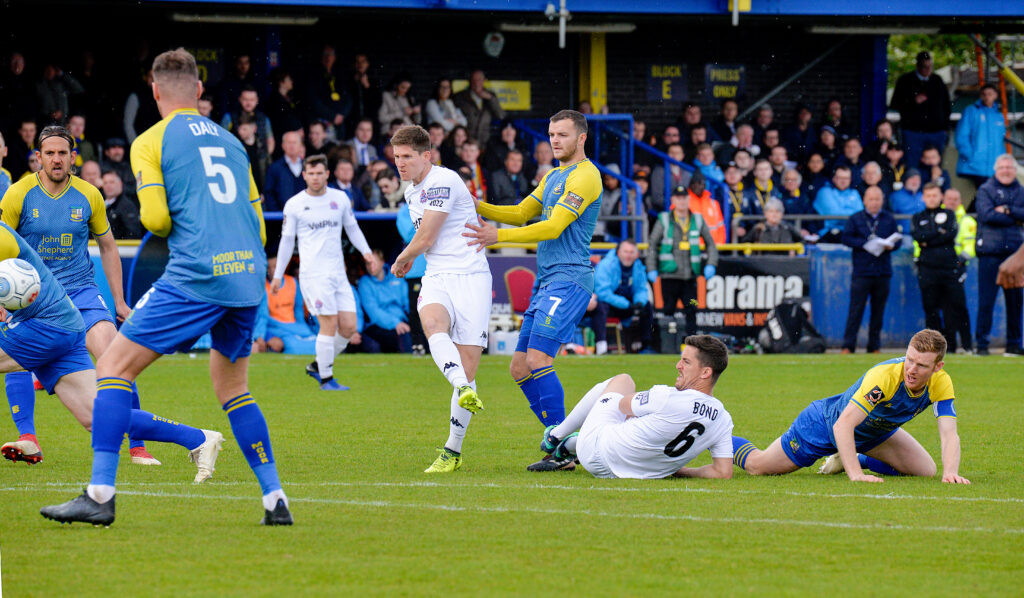 4.  Fylde travelled to Stockport County, this time for a chance to feature again at Wembley Stadium. I captured this picture with the players flying after Rowey had fired in a trademark thunderbolt shot which gave ex keeper Ben Hinchliffe not a hope in a million of stopping. 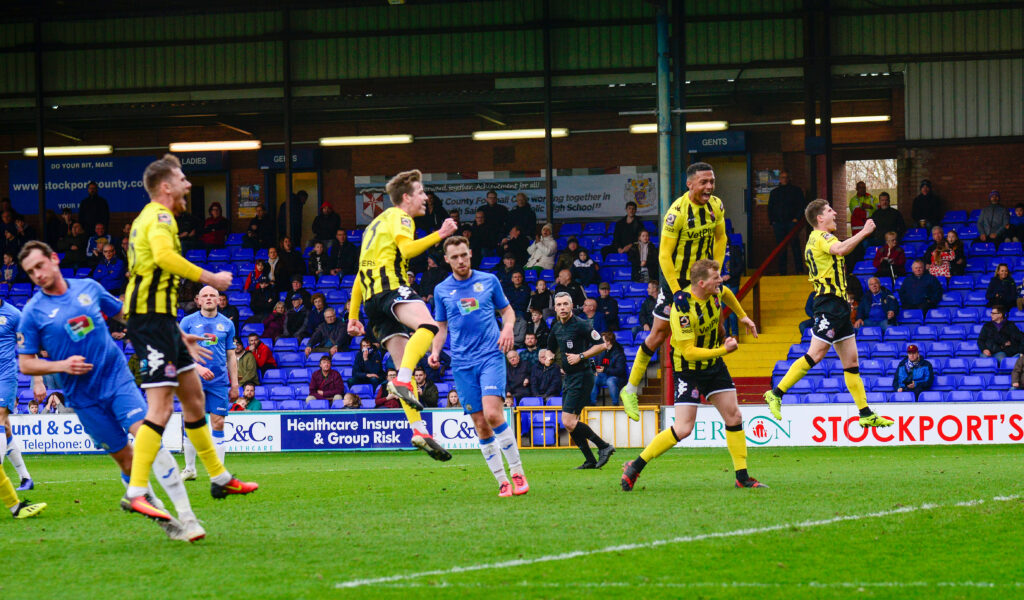 5. The club saw fit to place this picture just outside the entrance to the players tunnel at Mill Farm, the players were celebrating a Matty Blinkhorn header against title contenders Kidderminster Harriers, they all ran to the bench were they formed a mountain in front of Chally and Colin, Fylde went on to draw the game 2-2. 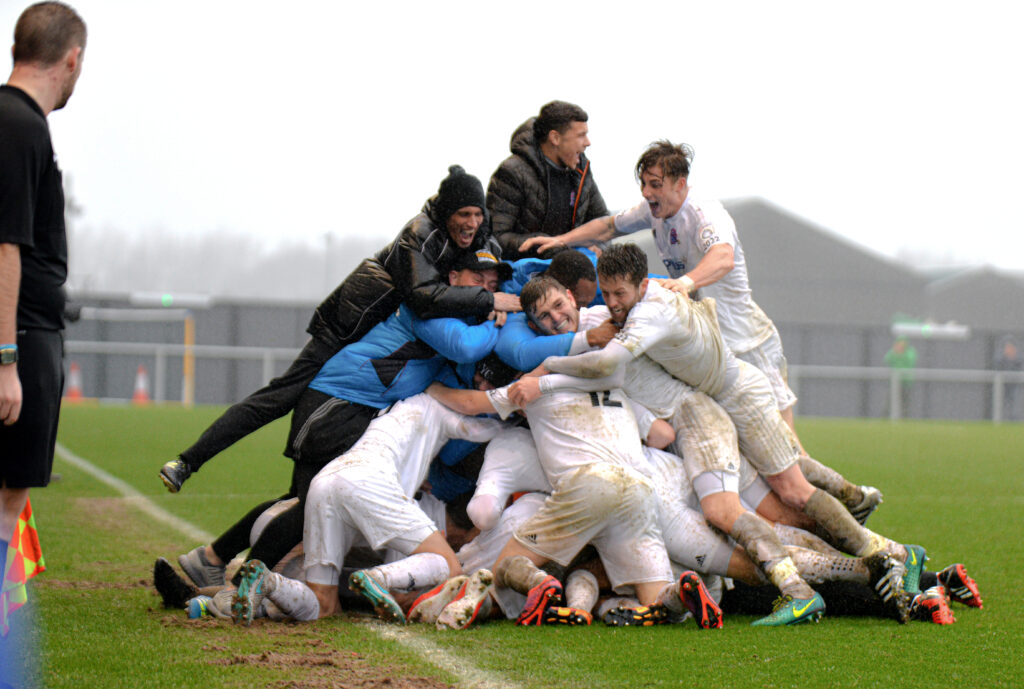 6. Fylde travelled to Dagenham & Redbridge, needing points and the picture shows the jubilation in the players faces after Whits had popped up in the final minutes to score that vital header, although all in vain now after the coasters were relegated in the cruel PPG ruling. Fylde won 1-2. 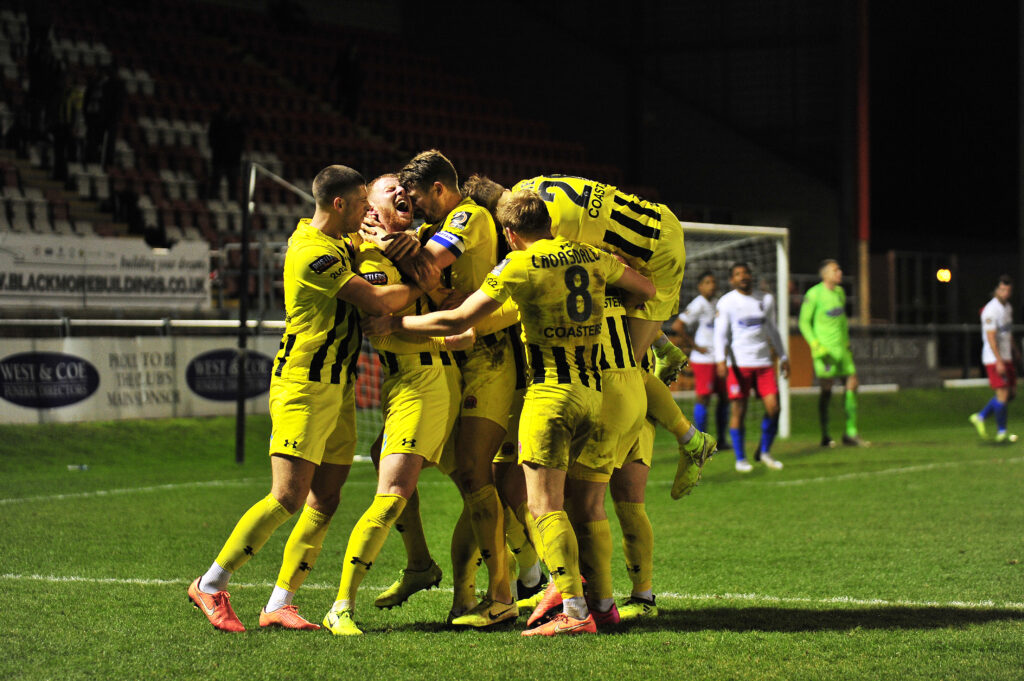 7 & 8. Two trips to Wembley Stadium within a week, a poor result in the playoff final vs Salford, “surely not again”, we thought as we faced National League champions Leyton Orient. My favourite two pictures from these are one of the ‘king of penalties and free kicks’ Danny Rowe. I’d spoken to Danny and asked him to put the Trophy lid on his head, he posed for the shot and I was surrounded by a hoard of other match photographers. And the second is of the pitch group, with players and staff. 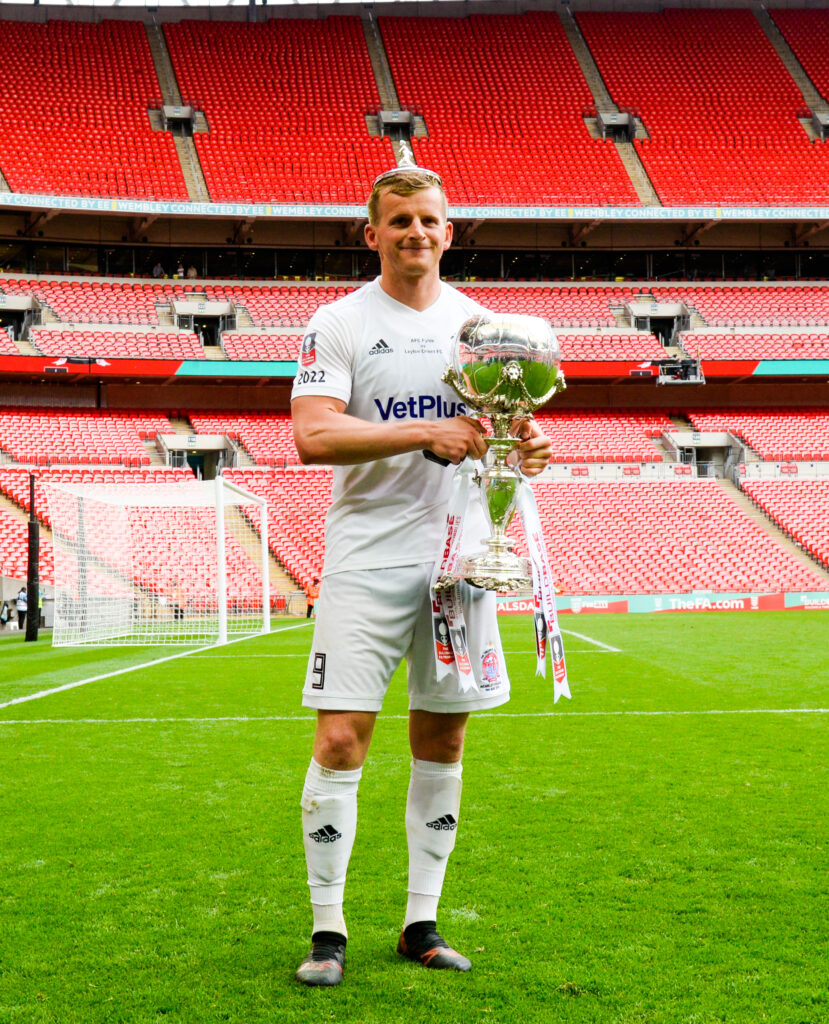 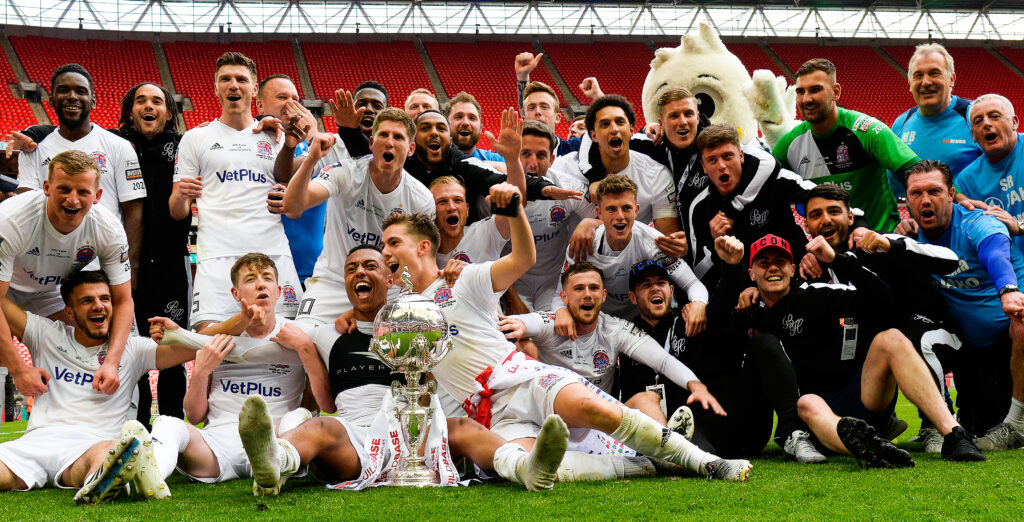 9. Fylde celebrated winning the National League North 2016/17 season when they won the title at Boston Utd – here they are after the game with the champers celebrations in the dressing room after the 4-2 win against Worcester City. 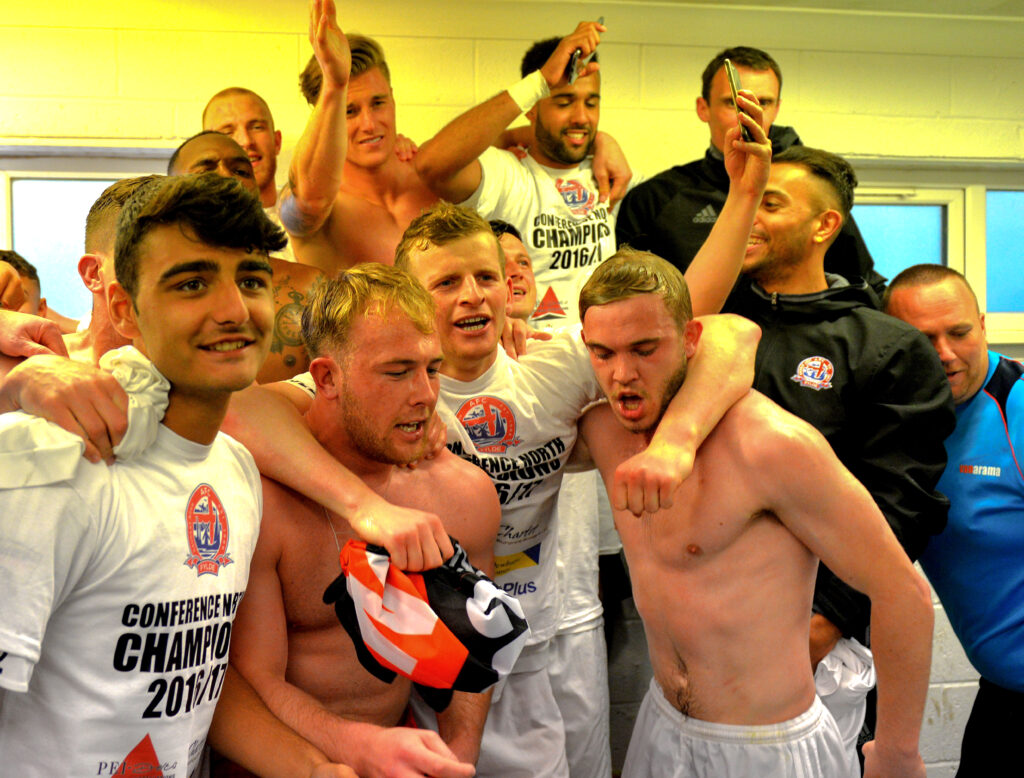 10. I couldn’t leave without a picture of the fans, many have I taken, some good, some bad and some too rude to post, but they’re all a great lot and good-humoured, and I appreciate that little song that starts 🎵 Stevie Mac, Stevie Mac …..🎶🎼 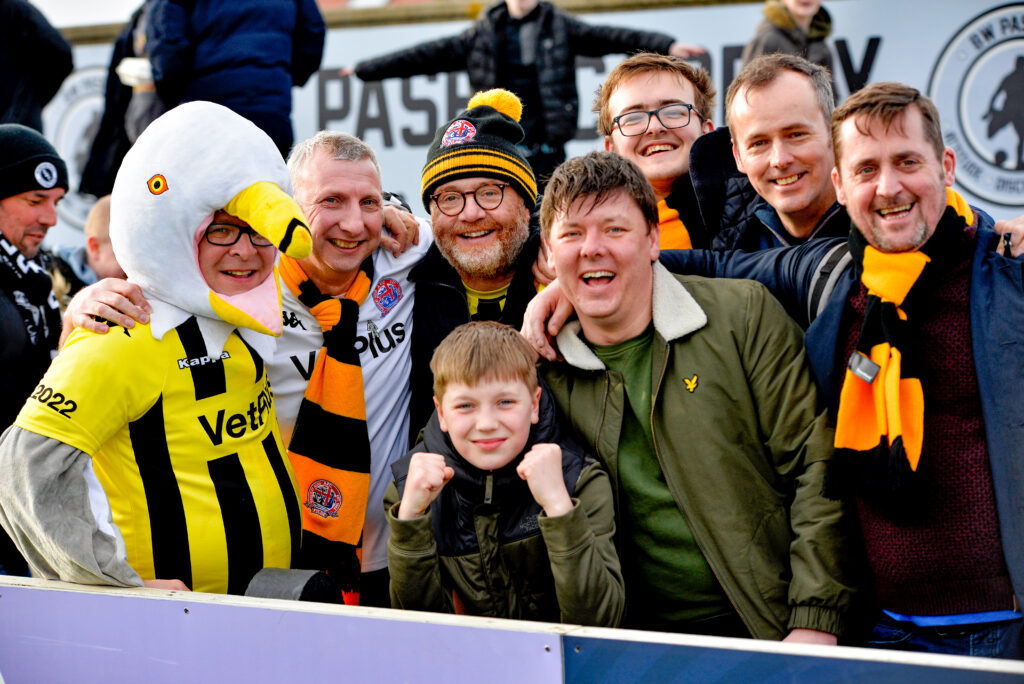 I hope that this collection of images helps you all re-live some amazing memories. I have a feeling we are not done just yet. Come on you Coasters!

See you all soon,