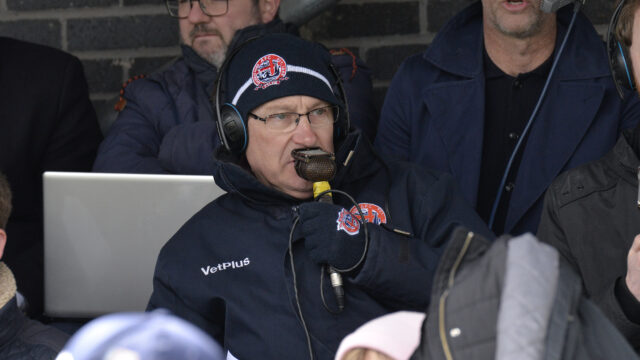 My View From The Terrace | Brian Porter

Introducing our new fan feature, My View From The Terrace, where we will be giving fans the chance to share their memories of following the Coasters down the years. The ups and the downs; the good and the bad; a rainy Kellamergh Park or a sunny Mill Farm – we want to hear about those moments you cherish.

First up, we have our stadium announcer, match commentator, and loyal supporter, Brian Porter. Here he tells us what he has missed so dearly since the turnstiles were closed.

Well, it’s been a long, hard, frustrating year and a bit, hasn’t it?

One curtailed season that saw us relegated and a second one scrapped completely.

The 2022 detractors will be loving it right now.

But if you go on a journey and arrive a few minutes late, you’re pleased.
If you go to a party, you don’t want to be the first to arrive.
You want to get there after the start and be the one who livens it up.

Following The Coasters in National League North has been done online since August, unless you were one of the intrepid “ladder supporters”, and with that, came an opportunity for me.

I had the privilege of being at most games, home and away, to bring you the action on CoastersTV and Coasters Live. Whilst it was the Club who gave me the job, it was the fans who kept me in it. Thank you all.

I can’t wait to be back in the ground with fans.
You can’t beat the buzz and banter you get from people.
It will be amazing to be arriving early to get the music ready and chat with Jim, Nick, Tayls and the players, as they arrive.
To wander through Bradley’s and chat with fans of both teams.
To be able to see what’s on the menu in Churchill’s and chat with people in there.
To give that call at 5 to 3 of, “Please welcome your teams…”
Then watching the game from the tunnel with those in “The Royal Box” behind me giving their observations of my performance (you know who you are, and I’m missing you).

The highlights, of course, will be announcing Coasters goals, and the raffle at half-time.
I think I’ve even missed being asked to repeat the raffle numbers even though they are on the screen.

I don’t normally make predictions and I’m not about to start. I almost wrote one in this piece, but I’m not going to tempt fate. I will say this, however. There is something about this Club at this time that is different. It’s not something I can easily define, or describe. But it FEELS good, very good. It’s like whatever it is, has become the DNA of AFC FYLDE.
I don’t think any of the players who Jim signed at the start of last season were here to get one promotion. I believe they all saw the job as back-to-back promotions.

So, as we go into the season and the next one, just remember…