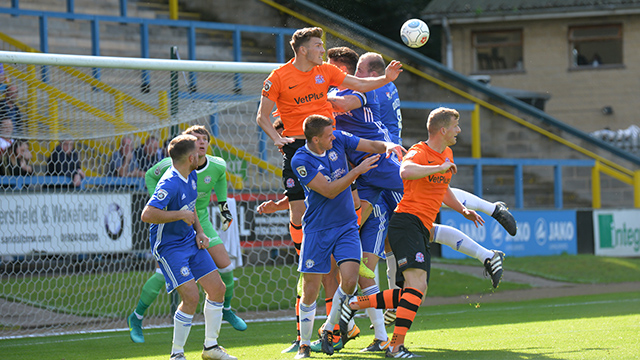 “We must kill teams off” – Tunnicliffe

AFC Fylde defender Jordan Tunnicliffe insists his side must start seeing games out after dropping points from a winning position for the fifth time this season against FC Halifax Town.

The Coasters looked on course for their third National League victory in the space of seven days when striker Danny Rowe netted his third goal of the season at The Shay.

However, Tom Denton’s second-half double condemned Fylde to their second defeat of the new campaign, meaning they have now dropped 11 points after taking the lead over the opening eight matches.

Tunnicliffe, signed over the summer from Kidderminster Harriers, admitted that his side must start killing off teams.

Tunnicliffe said: “It was disappointing to lose the game especially after taking the lead. You definitely have to see the game out in those situations away from home.

“We were comfortable and controlled the game from the start of the second half. In a way, scoring the goal killed us. It seems a funny thing to say but as soon as we scored we went onto the back foot and invited pressure and we were punished for that.

“We had a lot of chances to score, but that’s football. You don’t put everything away, but we do need to start killing off teams.

“We proved in the two previous matches that we can go ahead and see games out. Unfortunately we didn’t manage to do it a third time.”

Town striker Denton has long been a tormentor of the Coasters and Tunnicliffe was disappointed that the towering frontman was once again on target against Dave Challinor’s side.

“I thought we nullified his threat well until the goals. He was winning headers but he wasn’t a major threat because we were tight and winning second balls.

“So it was disappointing that we lost him for their first goal. We should have been quicker to the rebound but unfortunately he was there first.”

Despite the defeat, Tunnicliffe was satisfied with the start to the season for the National League new boys: “I’m fairly satisfied with how the season has started considering that was just our second defeat. However, when you look at how many times we have taken the lead then we should have a higher points total.

“It’s a long season with a lot of games still to play and we will improve. We are back at home on Saturday against Bromley with a chance to put it right. We have been doing our homework on them this week and we will be ready to go.”