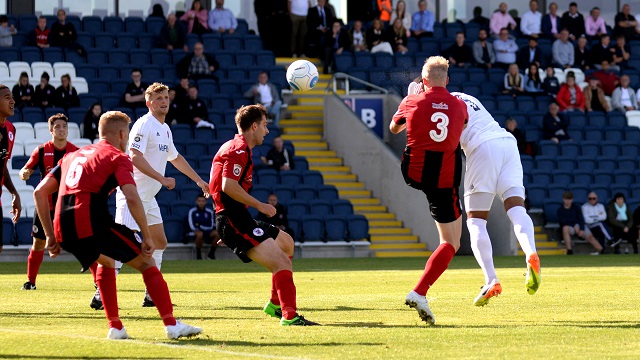 We must improve – Chally

AFC Fylde manager Dave Challinor was satisfied with a point in the 1-1 draw against Brackley Town at the weekend, but admits his side must start to perform better.

New Coasters signing Steve Williams equalised late on to claim a point for Fylde in the club’s first game at Mill Farm.

“It’s obviously good to not lose on a day like that. The ideal scenario was that we would have performed better and that we would have won the game but it wasn’t to be. I knew it would be a tough game and we started really brightly. For fifteen minutes, we were camped in their half but it just shows how difficult it is when you concede goals and you give teams something to hold on to.

“They were organised, they were difficult to break down and it became a very frustrating afternoon for us. We kept going. We missed two glorious chances in the first half, two open goals really and if you take them it’s a different story. We know that if we can get our noses in front then teams have to open up.

“It was a tough afternoon but we know we can play a lot better. We will play an awful lot better. We’re still adapting to a different training regime and we’ll continue to evolve. It may take a while but what I’ve said in there is that I accept that but I can’t accept that for long when we’ve got to pick up results.

“If we are a better team in two months’ time, which undoubtedly we will be, then fine but we’ll probably have lost fifteen games by that point. We need to concentrate on picking up results and look forward to Tuesday now.

“If we go to Altrincham on Tuesday and win then today will look like a decent draw so that’s where our mindset is. We’ll recover, look forward to Tuesday and go there and try and win.”