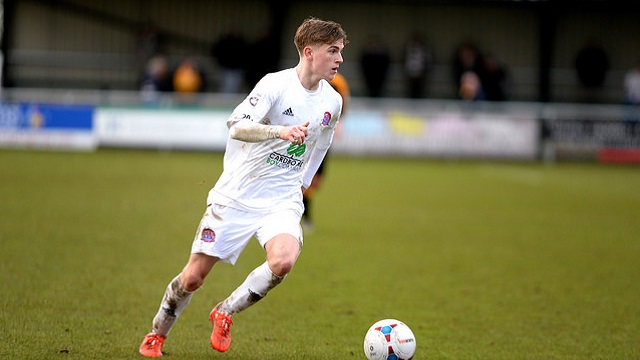 AFC Fylde manager was delighted with his side’s performance in the 5-2 victory over Boston United at the weekend.

The Coasters had picked up just one point from the previous three National League North outings, but were back to winning ways in emphatic fashion in the seven-goal thriller.

“That was much more like our old selves,” said Challinor. “We scored five and could have comfortably scored another five. We attacked them really well and played at a high tempo.

“Boston are a tough team to play against and they are at the right end of the table for a reason so to win so convincingly was very pleasing from my point of view.

“We are an offensive, free-flowing, forward thinking team and we had drifted away from that a bit recently but we played with more freedom and got our reward for that.”

Chally was also full of praise for goalscorer James Hardy after his man of the match display.

“James is a fantastic footballer and he was very good on Saturday. He is slightly under-developed physically for this league so we have had to be careful with him and he has had to be patient. Technically he’s one of the best players we have and if you watched us train he would probably be the one that stood out.

“I’m made up for him and his future looks very bright. If he keeps learning and developing then he will be a very good player and I think he is at the right place to do that.

“If the lads play well then will keep their place in the side and they’ve done that. We now have to make sure we back that up with another win tomorrow night against Corby Town.”