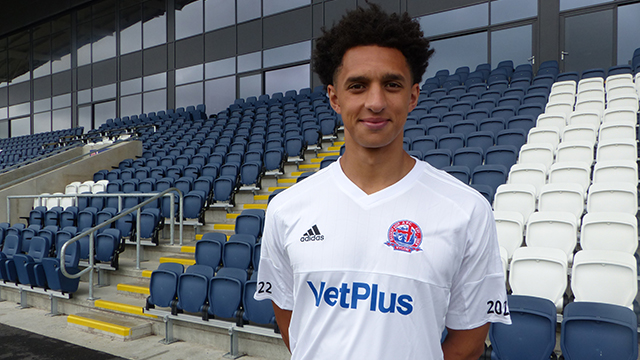 Montrose on the rise!

AFC Fylde new man Lewis Montrose is relishing his opportunity to climb back up the football pyramid with the Coasters.

The midfield man, signed on Tuesday from Stockport County, has enjoyed most of his career plying his trade in the Football League, twice winning promotion to League One during spells with Wycombe Wanderers and Gillingham.

Montrose made the switch to Edgeley Park two years ago in pursuit of regular football but the two-time Stockport Player of the Year is now ready to start working his way back up the football ladder.

Montrose said: “There was some interest from Fylde back in January but the clause in my contract didn’t allow anything to happen. However, it’s gone through now and I’m really looking forward to my future here with Fylde.

“I’ve had a look around here and it’s fantastic. It’s a brand new facility and the club have massive ambitions and I wanted to be a part of that.

“This is a great opportunity for me personally to go and play at the next level with the chance of getting back to the Football League. I’m looking forward to the journey and hopefully we can have a successful season.

“It’s important to get off to a good start and see where that takes us. We want to have a solid season and keep up the pressure.

“I’ve had plenty of experience in League’s One and Two but this is my first season in the National League and I can’t wait for the challenge.

“I know what it takes to be successful in the League, having won promotion to League One twice with Wycombe and Gillingham, and that’s where I ultimately want to get back to with Fylde.

“There are some big clubs in the National League now that have been in the Football League and I have experience on my side from playing higher up the pyramid. Hopefully I can now bring that to Fylde and we can enjoy a great season.”

The 28-year-old admits the move to Fylde has long been on his mind but insists that he is not coming here to simply make up the numbers.

“Since the initial interest back in January, this move has always been in the back of my mind,” added Montrose. “When the club came back in for me, it was exciting. The manager and the chairman have been great and it’s a massive opportunity for me that I am going to grab with both hands.

“All footballers want to play games and I am no different. You train all week to play football on a Saturday. I want to play as many games as possible. I played every game for Stockport last season and I want to do the same this season for Fylde.”