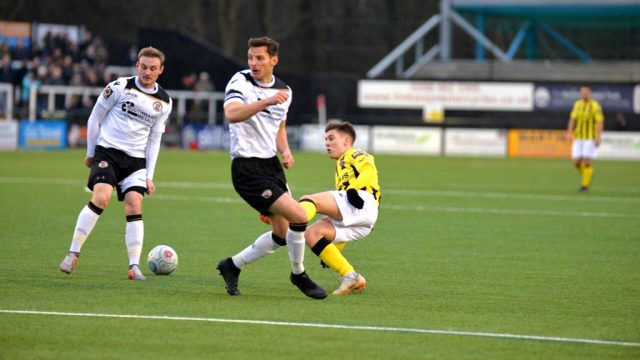 Misery Compounded for Coasters at Bromley

The Coasters were forced into one change, as Ryan Croasdale struggled to shake off the injury he picked up at home to Barrow on New Year’s Day.

“Hopefully we don’t need him as that will be a good sign!”

Chally talks about Mason Bloomfield, named among the substitutes today, and the injury of Ryan Croasdale. pic.twitter.com/cnpkB6hPxc

Mason Bloomfield, who signed on-loan from Norwich City on Friday afternoon, was named amongst the substitutes, whilst Lewis Montrose also made his way onto the bench.

Bromley, on the other hand, were unchanged for the third game in a row, following a 2-1 win at home to Sutton on New Year’s Day.

The Coasters started the much better of the sides, with a great flowing move started off from Haughton’s back heel, releasing Philliskirk to find Burke, who won a corner.

The corner was sent in low from Gnahoua, and the prolific Danny Rowe nipped in front of the Bromley defenders to guides it home past Gregory, who had no chance from close range.

Although Fylde continued the better team for the following exchanges, Bromley almost drew level after 12 minutes.

Gnahoua was too relaxed in trying to take a touch in his own box, allowing Brindles to pick his pocket.

Brindley’s effort was low and powerful, but Jay Lynch was equal to it, trapping it between his legs from close range.

Despite being largely on top, Fylde conceded on 25 minutes, as a corner fell to skipper Jack Holland, who sent a powerful effort through a crowd of bodies and deflecting past Lynch to draw level.

It looked like the final touch came from forward JJ Hooper, who was lurking dangerously, and managed to direct it home.

Just two minutes later, the turn around was complete, as Jordan Tunnicliffe’s late lunge on George Porter saw the referee point to the spot.

Set piece specialist Sutherland stepped up, and sent it powerfully into the bottom corner to make it 2-1 Bromley.

The hosts then had the chance to claim a massive stake, as Porter was found unmarked at the back post, but sent his first-time volley wide just yards out.

The second half started with a statement of intent from the Coasters, as Dave Challinor made a double substitution, introducing Montrose and Bloomfield in place of Bond and Tunnicliffe, reverting to the more familiar 433 formation.

The first chance fell to the hosts though, as Raymond’s chipped ball found Porter, whose volleyed effort flew over the bar – but the linesman saved his blushes, flagging him for offside.

The Coasters then built their way back into the game, largely in part to Mason Bloomfield, who was causing problems all across the pitch for Bromley.

Bloomfield drifted out wide to collect the ball on this occasion, cutting back precisely to Gnahoua, who made no mistake from close range, thundering it home for his second goal in a Fylde shirt.

Moments later, Luke Burke was forced off through injury, with Arlen Birch replacing him, which proved to be pivotal.

Mason Bloomfield worked hard to latch on to a long ball and is bundled down, but the referee wasn’t interested.

Bromley were quick to counter, with Sutherland to send a stinging effort towards Lynch, who held well.

Play was paused as Bloomfield’s fall in the box had proven to be an awkward one, and medical staff were rushing onto the pitch.

The stoppages were lengthy, and it was clearly a serious injury from the reaction of the ground staff – which lead to concern, with everyone doing their best to help Bloomfield off of the field and to receive treatment early, for what was believed to be a compound fracture to his forearm.

Bloomfield’s brilliant debut was cut short, stretchered off, and with no possible substitution to be used by the Coasters who had used all three, the outlook wasn’t positive.

JJ Hooper didn’t take long to capitalise, as he latched onto a ball from Raymond and tucked past Lynch, edging Bromley ahead for the second time, and netting his second of the afternoon.

The injury ensured 13 minutes of added time, in which Bromley had fresh attackers in the shape of Buigel and Hines to run at the 10 men of Fylde.

In the 97th minute Lynch pulled off the save of the game, as Porter unleashed a spectacular half volley, which Lynch had to be alert to, to pull off a sensational stop.

Fylde’s golden chance arrived late late on, as Birch’s tenacity saw him release the ball to Rowe, who checked inside and flashed the ball into Haughton.

The ball played was just in front of Haughton who had to readjust, and Bromley were able to recover and shut out the attack.

There wasn’t to be a late leveller however, and Fylde suffered their first loss of 2019 in disheartening circumstances, having played so well at times.

“Unfortunately it’s a compound fracture of his forearm which isn’t nice to see for a young lad,” said Dave Challinor.

“He showed in that 20 minutes what a massive career he has ahead of him, so he can’t let this affect him – he’ll come back bigger and better for it.”

“You roll the dice when you make changes, and then we’ve got sloppy, conceding a goal from a set piece, which we knew they were a threat from.”

“We made changes, bought Mason on, and started well, getting the equalising goal and taking the front foot.”

“We then had to make a substitution for Luke Burke which we had no choice about, and then what happened with Mason – we were the victims of circumstance really.”